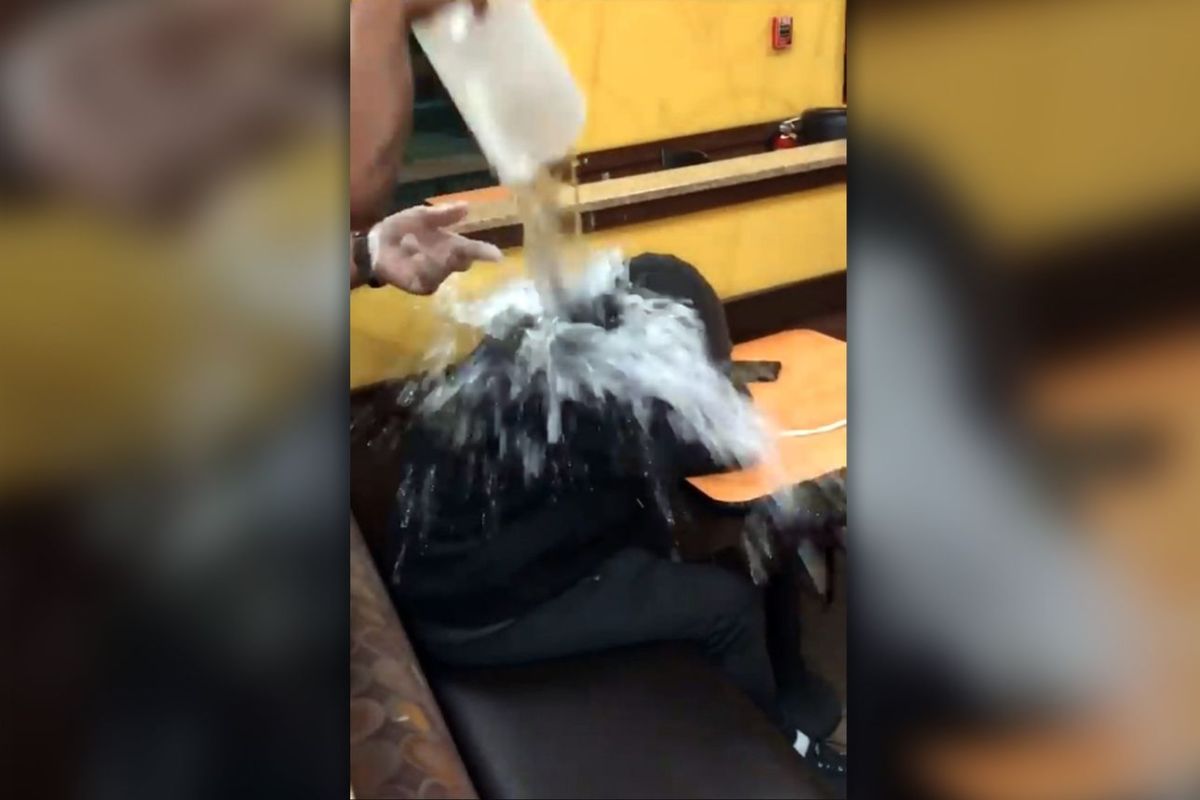 Several employees at a Syracuse Dunkin? Donuts have been suspended after a video surfaced online showing a worker throwing ice water on a homeless man. The video was posted by Samuel Brazeale showing Jeremy Young napping at a table, and an employee wearing a headset getting close, pouring the pitcher of water, and saying, “How many times I?ve gotta tell you to stop sleeping in here.?

Young immediately stands up, shocked at the situation, while laughter is heard in the background. He quickly grabs his phone and charger and attempts to dry them, explaining to the employees “it was an accident” and he simply fell asleep. The video quickly became viral, causing controversy around the area. Several users online are commenting on the Facebook post, calling the act evil, cruel and disgusting.

Advocates for the homeless in Syracuse decided to take action and went to Dunkin? to talk with the manager about the incident but she was not available. Not knowing what to do, Al-Amin Muhammad called for a peaceful protest outside the store to show ?Homeless Lives Matter.? Advocates showed up to the donut shop, holding signs to stand up for Young and the homeless community.

Samuel Breazeale started a GoFundMe campaign for Young, to raise enough money to buy him dry clothes and a new phone charger. Protesters say they are hurt and angry, stating the incident should have never happened. Some were arguing the worker should get fired due to his action, while others just wanted them to apologize and ‘do the right thing.’

Dunkin Donuts in #Syracuse is new flashpoint on homelessness after video apparently shows store worker dump water on sleeping homeless man to get him to leave.
Photo: Cheryl Neri pic.twitter.com/EQUwJSY71h

Dunkin? Franchise and Chief Operating Officer, Kimberly Wolak released a statement to about the incident.

“Dunkin? has been a part of the Syracuse community for many years, and as the franchisees who own and operate the North Salina Street location, we were extremely disturbed by the behavior of our employees captured in the video. It not only violated our written policies, but goes against our core values as an organization–which include creating a welcoming and hospitable environment and treating everyone with dignity and respect.”

The company confirmed the employees involved in the incident were suspended pending a complete investigation. The individual who poured the water will be contacted and will be forced to apologize to the man for the negative experience.

Dunkin’ stated they intend to work with local advocates to make sure their employees are better educated on how to engage with homeless individuals and where to direct them in the community for the appropriate assistance. As of now, the advocates have raised $1735, their initial goal being $150.