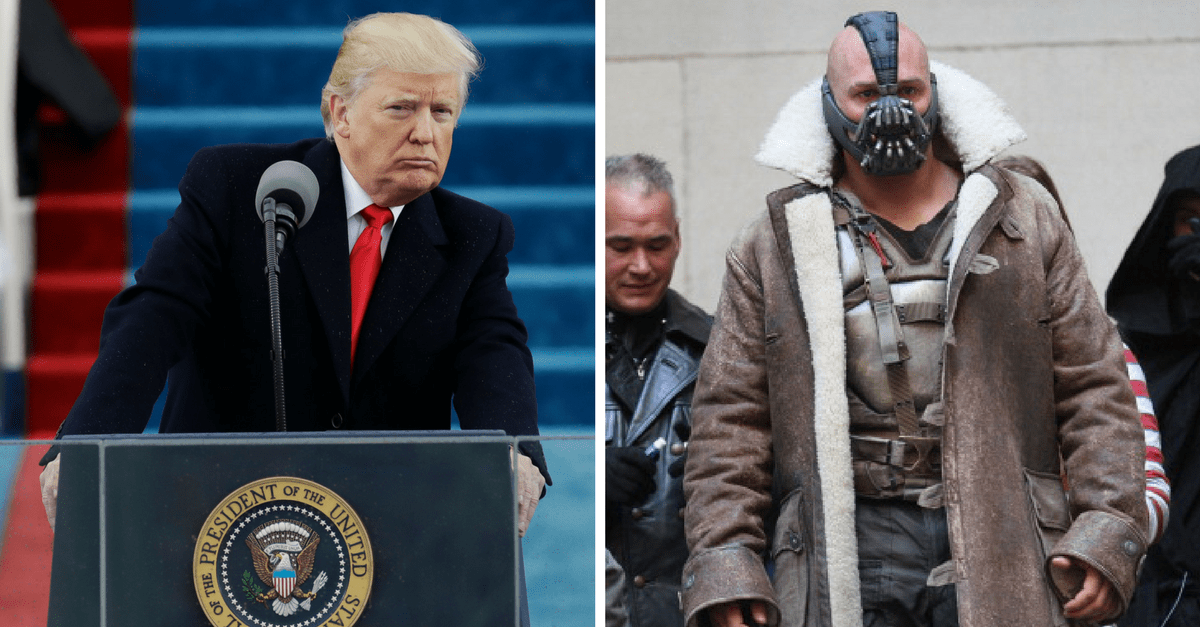 (Left) AP Photo/Patrick Semansky (Right) Photo by Marcel Thomas/FilmMagic
(Left) President Donald Trump delivers his inaugural address after being sworn in as the 45th president of the United States during the 58th Presidential Inauguration at the U.S. Capitol in Washington, Friday, Jan. 20, 2017. (AP Photo/Patrick Semansky) (Right) NEW YORK, NY - NOVEMBER 05: Actor Tom Hardy is seen in costume as Bane on the set of 'The Dark Knight Rises' on location on Wall Street on November 5, 2011 in New York City. (Photo by Marcel Thomas/FilmMagic)

As President Trump addressed the American people for the first time, he had a very special and somewhat familiar message for them.

“We are transferring power from Washington, D.C. and giving it back to you, the people,” Trump said in his inaugural address.

It’s a seemingly innocent message, recalling his campaign promise of taking down the political establishment and giving our government back to its citizens. But why does it sound like we’ve heard those words before? Because we have — when villain Bane spoke very similar ones in “The Dark Knight Rises.”

“We take Gotham from the corrupt…and we give it to you, the people!” Bane shouted in the film.

It didn’t take social media long to make the connection, with videos comparing the two clips flooding people’s newsfeeds. But don’t worry, one Facebook user made it clear that he’ll be around to save the day if ever needed, commenting, “I will volunteer to become BATMAN if this man becomes out of control.”