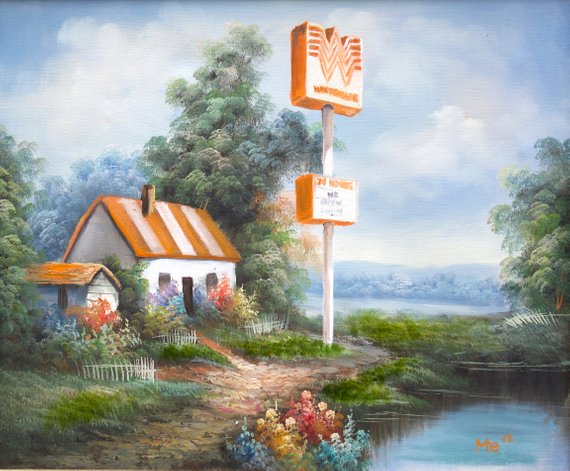 Food is art. There are very few mediums that express a culture more than food and art, and when the two combine, you get something truly remarkable. Artists and foodies alike can agree that it is very easy to find food and drinks in still life paintings and folk art. However, there are certain artists that go above and beyond to showcase the culture of food in their paintings. Norman Rockwell introduced a feeling of comfort and warmth with his famous Thanksgiving oil painting, Freedom from Want. In the 1960s Andy Warhol created Campbell’s Soup Cans, not only beginning the trend of pop art but showing the world that even a painting of a can of soup could be beautiful.

Michael Esparza, an artist in San Antonio, Texas is taking social media by storm with his interpretation of including food in oil paintings, fast food specifically. The artist, who spend a year studying art in Italy, came back home to Texas in 2012 and realized how much fast food influences Texas culture. After returning home and immediately grabbing Whataburger, Michael stated that the idea of creating original paintings featuring a, “a little bit Bob Ross and a little bit Thomas Kinkade,” came to him after realizing that his favorite fast food joints were a source of comfort and home when he returned to the States.

The paintings, which feature Texas hotspots like Bucee’s, Whataburger, Taco Cabana, and Bill Miller’s BBQ, were a way for Michael to share Texas’s big love for state brands. “I wanted to make something that was super Texas, a landscape that was, even more, Texas than the landscape that we have,” he says during an interview with Texas Monthly. “A lot of people I would talk to in Europe, they would tell me what they thought Texas looked like. So I wanted to make those landscapes like what they thought, but also, as a person from here, I wanted to make them even more Texas. It’s like Texas squared.”

Michael started selling his work at a local art market once he got home from Italy, sharing his original oil on canvas paintings with art lovers. He opened up his own Etsy shop online this past May, selling about one painting a month. That is until the internet found out about his food art. While he does not sell the originals on Etsy, food & drink lovers may buy prints of his Texas works.

You can find his one of a kind fine art on his Etsy page, with art prints ranging from $25 for an 8×10 print to $85 for an 18×24 print. There’s no need to have a degree in art history to enjoy these food paintings. Just a love for a Monterey Melt and beaver nuggets.

This article was originally published on December 17, 2018.