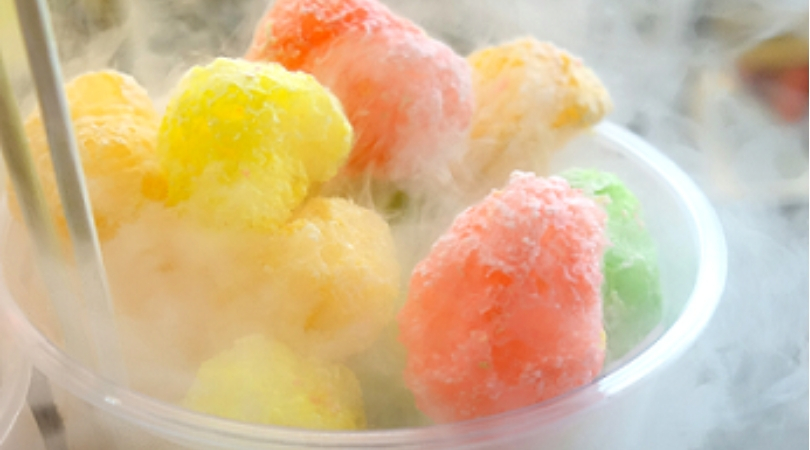 The Food and Drug Administration has sent out an alert for the smoking liquid-nitrogen treat called Dragon?s Breath after it is believed to be dangerous to the point of being life-threatening. For those of you who don?t know what I?m talking about, Dragon?s Breath is puffy cereal infused with liquid nitrogen. It produces smoke like vapors that spew from the persons? mouth and nose, which is how the treat got its famous name.

Also sold under the names Nitro Puff and Heaven’s Breath, Dragon Breath balls can usually be found at mall kiosks, fairs, and festival across America. The FDA is urging parents to stop consuming them, stating the effects of eating the product can cause severe damage to skin and internal organs if mishandled or accidentally ingested due to the extremely low temperatures it can maintain. While inhaling the vapor can create a cool visual smoke life effect, the vapor can make it difficult to breathe, harming anyone who suffers from asthma by blocking their airway. Nitrogen is a gas at room temperature but can be liquid around -320 freight. Experts believe eating or drinking liquid nitrogen is the worst thing someone can do, comparing it to drinking boiling water or oil, which is why people should make sure all liquid nitro is evaporated before eating anything made with it.

In 2017, Tina McArthur claims her 12-year-old granddaughter suffered a chemical burn while trying out the dessert at a Florida fair. McAruthur said her granddaughter was taken to the emergency room after she burned her thumb. The ER doctors had to cut it open and remove the dead skin to get the infection out to avoid losing it. Although liquid nitrogen isn’t toxic per say, ingesting liquids or food with too much nitrogen can do far worse than a burned thumb, causing severe cryogenic burns or frostbite to your mouth.

In July, another mother posted on Facebook about her experience, after her son suffered an asthma attack after consuming Dragon’s Breath. Rachel Richard McKenny wrote how after her and her son left the mall,  10 minutes later he started to cough. 20 minutes in, the cough became really consistent, and he was having trouble catching his breath. Afraid they wouldn’t make it on time to the hospital, the mother drove the boy to the nearest fire station, and EMT was able to start Johnny on albuterol treatment and hook him up with an IV while preparing him for transport. Due to his condition worsening, the young boy was given a shot of epinephrine while on his way to Flagler Hospital. After administered, Johnny was given steroids and was able to calm his breath.

Aside from the cereal-like snack, the FDA state other foods on the market that are prepared with liquid nitrogen, such as frozen treats, cheese puffs, ice cream, and alcoholic and non-alcoholic drinks, are not considered a danger due to the nitrogen evaporating before eaten, unlike Dragon’s Breath.

Anyone who has experience an injury after eating the products or handling something prepared with liquid nitrogen at the point of sale should consult their healthcare professional. Consumers are also asked to report their injury to MedWatch. For more information you can visit the FDA website.

Watch: We Tried Vegan Food For the First Time