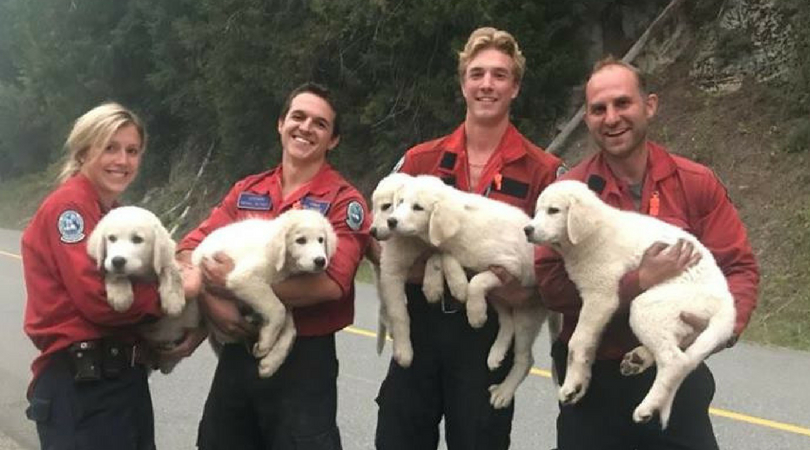 If you’re having the Monday blues and need some good news today to cheer up, then you have come to the right page! What’s better than one puppy? Five Puppies! Five adorable and fluffy puppies were found on the side of the road by four adorable (and maybe not so fluffy) British Columbia Wildfire firefighters. The crew was said to be heading back home after a day of fighting fires in the Southern Interior. The crew stated they noticed the puppies wandering on the side road along the Monashee Complex, a 151- kilometer stretch from Lumby, Bc to Three Valley Gap.

Through a Facebook post, the BC Wildfire signed off Sunday night, with the following heartwarming story about the lost puppers.

“While heading back from working on a fire in the Monashee Complex in the Kamloops Fire Centre, this Initial Attack Crew found a group of lost puppies on the side of the road. After contacting local authorities, and determining that there were no houses or properties nearby that the dogs could have wandered from, the crew decided to bring the pups back with them. They are now being well fed and cared for, and the SPCA has been contacted.”

A province-wide state of emergency due to the wildfires has been in effect since August 15th, where nearly 6,000 people have been evacuated. Another 11,00 have been told to prepare for evacuation orders. And although we do want to see a happy ending to this story, many users think they should probably keep the puppies and make a “fundraising” calendar including both the animals and the firefighters. I mean…it’s not the worst idea, if you ask me. I say they adopt them all and train them to become the best firefighter partners in crime out there.

According to the Facebook post comments, a user believes the puppies belong to her parents in the Cedarstone Farm. The Wildfire Service have not stated if the puppies were returned, or if the owner claimed them, but we sure do hope they found a good home for them.Three cheers for cute puppies and ahem…cute firefighters too!