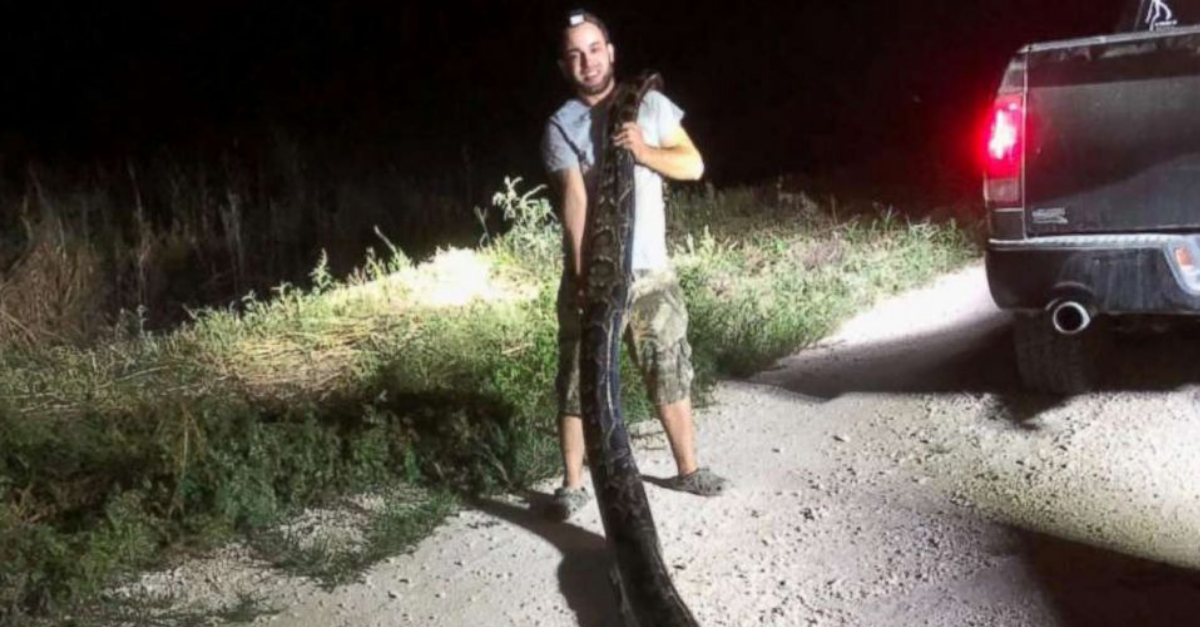 Florida is basically the movie The Mist but the fog is bath salt smoke and swamp gas. That’s where that state is at ecologically and atmospherically at this point. The Everglades are overrun with pythons that are growing to prehistoric proportions. They eat deer. We’re probably less than a decade from hearing about some poor bastard being swallowed whole in his car by some monstrous snake while driving his Fiat down a rural Florida road.

Really, we’re close. A record-setting python has been captured (and euthanized) in South Florida. The beast clocked in at a hellish 17 feet, 5 inches and 120 pounds. The female snake is the largest Burmese python ever caught in South Florida. Ever caught. There’s probably a 25-footer out there somewhere deep in the swamp, swallowing crushed gator corpses like they’re chicken nuggets.

The invasive species is decimating the fragile ecosystem in Everglades national park (presumably along with meth lab explosions and airboat wreckage), so much so that the South Florida Water Management District has a python elimination program. No limits. Kill them all until the Florida Everglades are freed from their almost literal cold, scaly grasp.

And snake hunters are aplenty. The man who captured the 17-foot python in question, Homestead resident Kyle Penniston, has killed 235 pythons on his own. Overall, snake hunters participating in the South Florida Water Management District’s program have killed 1,859 of the invasive pythons. All put together those Burmese pythons measure over two miles in length.

One-thousand eight-hundred and fifty-nine. That’s just how many that have been caught and killed. In that part of Florida. For reference, there are only 3,890 wild tigers left in the whole entire world. What the SFWMD should start doing is handing out katanas and flamethrowers and offering a thousand dollars a head. (BYOG would also be an option.)

Would that also wreck the Everglades ecosystem and catch a lot of native wildlife in the crossfire? Almost definitely. Every trailer dweller and gun store e-newsletter subscriber in the state would be out there lighting up the Everglades like it was ‘Nam. Anything to put “Python Hunter” on a business card and also have a reason to order business cards. Still, this Burmese python invasion has to be met with force. Wild, figuratively and probably slightly literally naked, Florida force. Until every single one of these monsters is gone.

And then, inevitably, when another generation of Floridians comes to pass and they release their own pet pythons into the swamps after realizing that taking them to the club wrapped around their necks will not score them women or a seat at the cocaine table, the whole cycle will begin again.

This story was originally published November 8, 2018.