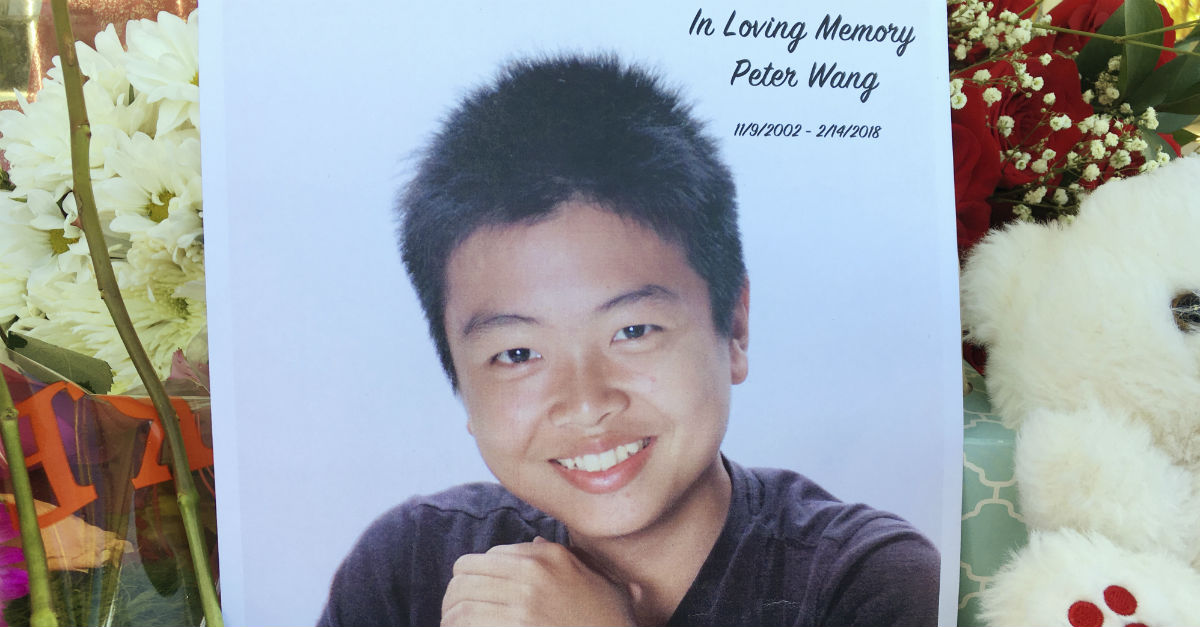 Members of Peter Wang’s community have come together to honor the 15-year-old hero in many moving ways.

Wang was among the 17 killed at Marjory Stoneman Douglas High School in Parkland, Fla. when a shooter came onto school grounds. Before he died, students recalled seeing Wang holding the door open for others while wearing his gray JROTC uniform. He placed their survival over his own, an instinct many family and friends have attributed to his selflessness.

By the time his funeral service began on Tuesday, many stepped up to show their respect for the heroic young man. And he’s received support from members of his local community as well as the national community.

Local 10 shared a picture on Instagram of ROTC members from several high schools in the area attending his funeral. The young men and women arrived while dressed in their uniforms.

A Sun-Sentinel journalist shared a picture of a group of veterans who decided to stand outside of Wang’s funeral while waving American flags.

Vets holding flags outside of Peter Wang’s funeral today. Wang, 15, died among 17 others after the Stoneman Douglas shooting. pic.twitter.com/31m7xFttKN

Wang had many plans for his life. He was supposed to celebrate on the eve of the Chinese New Year with his family last Thursday and he wanted to go to West Point and serve the country.

It was reported the morning of his funeral that the military academy will posthumously admit Wang to the class of 2025. His family will receive a letter of acceptance and honorarium tokens.

West Point will provide the family of Marjory Stoneman Douglas shooting victim Peter Wang a letter of acceptance to West Point Class of 2025, which was his dream, and honorarium tokens. His funeral is today. pic.twitter.com/kOb9P5mjdd

The academy explained that Wang exemplified the principles of “Duty, Honor [and] Country.”

One of USMA's priorities is to develop leaders of character who are committed to the values of Duty, Honor & Country. Peter Wang's actions on February 14 are an example of those principles & the academy honors his dream of being a West Point cadet with a 2025 letter of acceptance pic.twitter.com/fycvJBhte8

A WhiteHouse.gov petition requesting that Wang receive a military funeral with full honors is also going viral. If the petition reaches 100,000 signatures by March 18, the White House will be expected to give an official response.

At the time of this article, the petition has met well over half of its goal.

Wang will be remembered for his service to others and kind spirit.

“I forgot my lunch that day and he went to the vending machine with me and he bought me Sprite and candy and snacks. He put others before himself,” recalled Rachel Kuperman, one of his classmates.

“He is so brave. He is the person who is genuinely kind to everyone. He doesn’t care about popularity. He always liked to cheer people up. He is like the big brother everyone wished they had,” said his cousin, Lin Chen.

Wang leaves behind two younger brothers, ages 5 and 11, and his parents, who own a restaurant in Pompano Beach.

Those wishing to honor Wang are welcome to do so in a number of ways, as thoroughly explained by Task and Purpose here.

Anyone wishing to sign the petition can do so here.

RELATED: He selflessly saved lives in the Florida shooting — now a petition asks that he be honored properly