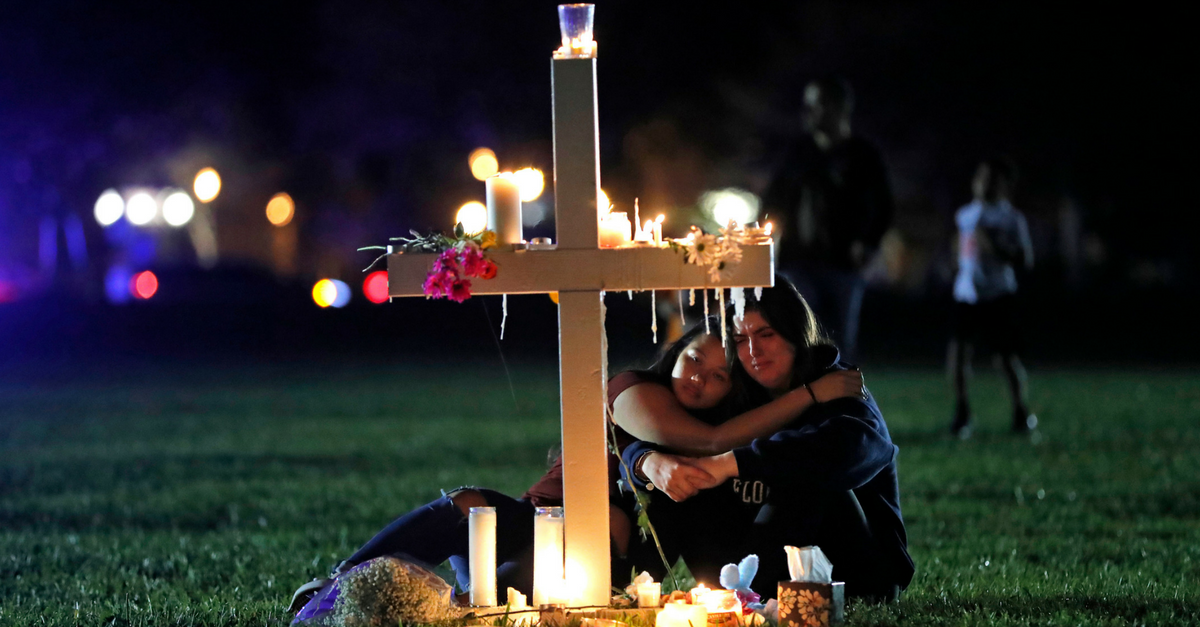 AP Photo/Gerald Herbert
Two people comfort each other as they sit and mourn at one of seventeen crosses, after a candlelight vigil for the victims of the Wednesday shooting at Marjory Stoneman Douglas High School, in Parkland, Fla., Thursday, Feb. 15, 2018. Nikolas Cruz, a former student, was charged with 17 counts of premeditated murder on Thursday. (AP Photo/Gerald Herbert)

After students made it clear that they won’t return to the three-story building at Marjory Stoneman Douglas High School where gunman Nikolas Cruz fatally shot 17 people this week, the school district indicated it’s working on a plan to tear down the building and to erect a memorial.

Broward Schools Superintendent Robert Runcie told media outlets on Friday that the district plans to destruct the freshman building on campus and to replace it, adding that an announcement as to when the school will re-open will come over the weekend.

“Parents and students have resoundingly told me they can?t go back into that building regardless of what we do,” Runcie said. “The other piece I heard is that that building will be used as evidence in any type of legal process that goes forward, so we won?t be able to access the building for a while anyway.”

He also indicated that a memorial for the victims will be erected around the site of the current building, which held around 900 students, to honor those who lost their lives and planned to speak with legislative leaders on Friday about funding a replacement building.

No student will ever walk back into the building where shooting took place at Marjorie Stoneman Douglas, Broward School Superintendent Robert Runcie just told me. Assuming funding from legislature, the building will eventually be torn down and replaced with a memorial @CBSMiami

Runcie told me he has heard overwhelmingly from parents and students that they should not have to walk those hallways and relive the nightmare of their classmates and teachers being killed. @CBSMiami

One problem for Runcie – where to place the 900 kids who were housed in that building. Marjorie Stoneman Douglas High was already at 100 percent capacity before shooting. Runcie tells me they are working on a plan. @CBSMiami

“The three of us just wanted to hold hands and say a prayer. Just looking at that building and talking about it now, I have goosebumps out to my head,” he said of himself and School Board members Robin Bartleman and Donna Korn when they visited the site after the tragedy. “I don?t know how teachers, students could get back in that building. I don?t even know how we?re going to open the whole campus, period.”

19-year-old Nikolas Cruz’s violent attack on the school killed 17 people and injured over a dozen more. He was arrested following the shooting and charged with 17 counts of premeditated murder. He is currently being held in custody without bond.