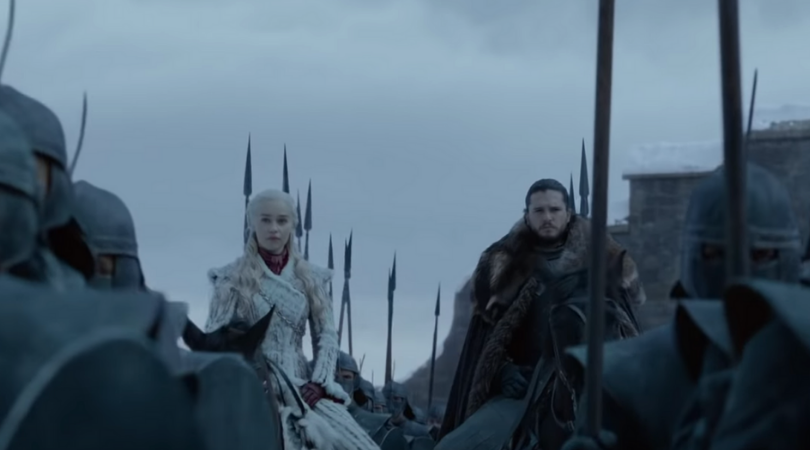 The final season of HBO’s inconceivably massive hit show Game of Thrones and the details within have been being teased for what feels like five years (it’s only been about two, which is still too long, dammit). There’s a release month! There’s a release date! Emilia Clarke was seen crying in a set photo! Maisie Williams and Sophie Turner had a cryptic Instagram post with Lena Headey! Kit Harington farted audibly in a way that makes it sound like he’s definitely been riding dragons while filming! (We here at Rare are guilty of almost all of this.)

There is literally no detail about the final season of Game of Thrones too small to generate news. There’s a decent chance more Americans can find Winterfell on a map of Westeros than their own state capital on a map of the state they live in, so it’s no surprise that a blurry White Walker photo could launch a thousand blog posts.

All that is over now. We have a real, actual, honest to God, theatrical trailer for the final Game of Thrones season. The official trailer for the last six episodes dropped today and it contains pretty much everything and everyone you could possibly want to see.

We’ve got a terrified Arya Stark running from gods knows what through the halls of Winterfell before cutting to a different Arya talking about how she wants to off a White Walker. Jon Snow and Daenerys Targaryen ride into Winterfell together with the Targaryen army. Cersei Lannister is in King’s Landing continuing her reign as a psycho B. Jaime Lannister, meanwhile, appears to be in the North and pleading his case to fight alongside the good guys.

Sansa Stark, on the other hand, looks a little unnerved by the dragons flying over Winterfell. Bran (of course) says something cryptic. Grey Worm kisses Missandei. The forces of good line up outside the walls of Winterfell for what appears to be the final battle against The Night King, whose super dead horse’s legs comprise most of the last shot of the new trailer. We also get a look at the Golden Company on Euron Greyjoy’s ships. Plus newly doing it relatives Daenerys and Jon Snow hang out in the crypts of Winterfell.

We don’t, however, get much of Peter Dinklage’s Tyrion Lannister, who is arguably the fan favorite of the Game of Thrones universe. There’s also not really much of any indication about how George R.R. Martin’s epic is going to involve Cersei in its last season. So while the final season trailer leaves a little bit to be desired (more Tormund, always more Tormund) the Emmy winning show still looks like it’s going to deliver an insane, jaw-dropping conclusion to what has been an insane, jaw-dropping series. Simply put, Game of Thrones’ final season is going to be real lit.

Game of Thrones returns to TV April 14th on HBO.

Watch: More Huskies Are Being Abandoned, and It’s All Because of ‘Game of Thrones’