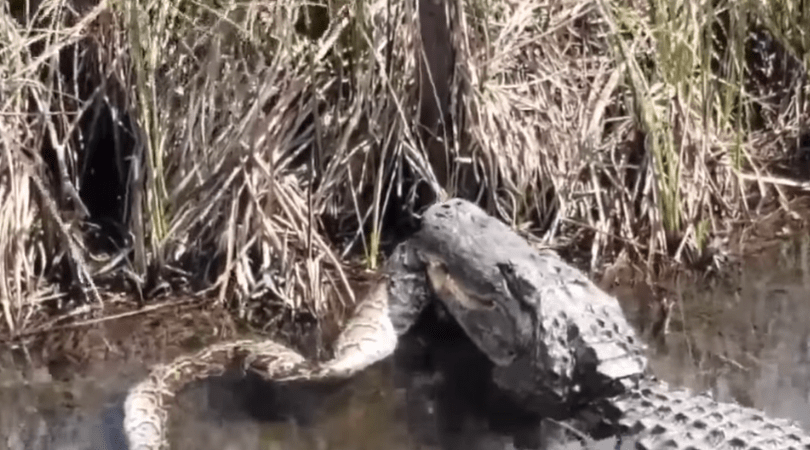 We should all be dead. How our soft, tasty, monkey ancestors — or whatever rodents they were a hundred million years before that — weren’t all devoured by terrifying birds, blood-thirsty lizards, and snakes the size of trees is a literal miracle. You’d have a better chance of hitting Black 17 on a roulette table five times in a row than we did being here. All of our ancient squirrel cousins should have met their ends in the webs of prehistoric mega-spiders. Raptors should be ruling the earth.

I am confident in this belief because of videos like the one below. It shows a dinosaur of a gator chowing down on a python that could strangle your entire family in their sleep if it felt like it. These are the sorts of animals that should be ruling the earth — pythons are at least slowly taking over Florida — but they didn’t nip humans in the bud when they had the chance, and now we have guns and other weapons to destroy these demons. Thank God.

If you were wondering who to root for in this video, it’s absolutely the gator. Pythons are an invasive species in Florida and they’re killing pretty much everything native to the state (including gators). The only good python is a dead python. This particular python, by the way, was over ten feet long. After the gator shits it out we should light said dump on fire. Just to be safe.

Regardless, this video is raw reptile power at its most terrifying. These things are monsters. They’re the result of millions of years worth of trial and error that have created perfect killing machines. This is a clash of cold-blooded titans. Good riddance to the python. Hopefully, this gator develops a taste for them and eats a hundred more.

This story was originally published February 21, 2019.