George H.W. Bush’s Last Words to Friends and Family Were Both Funny and Full of Love 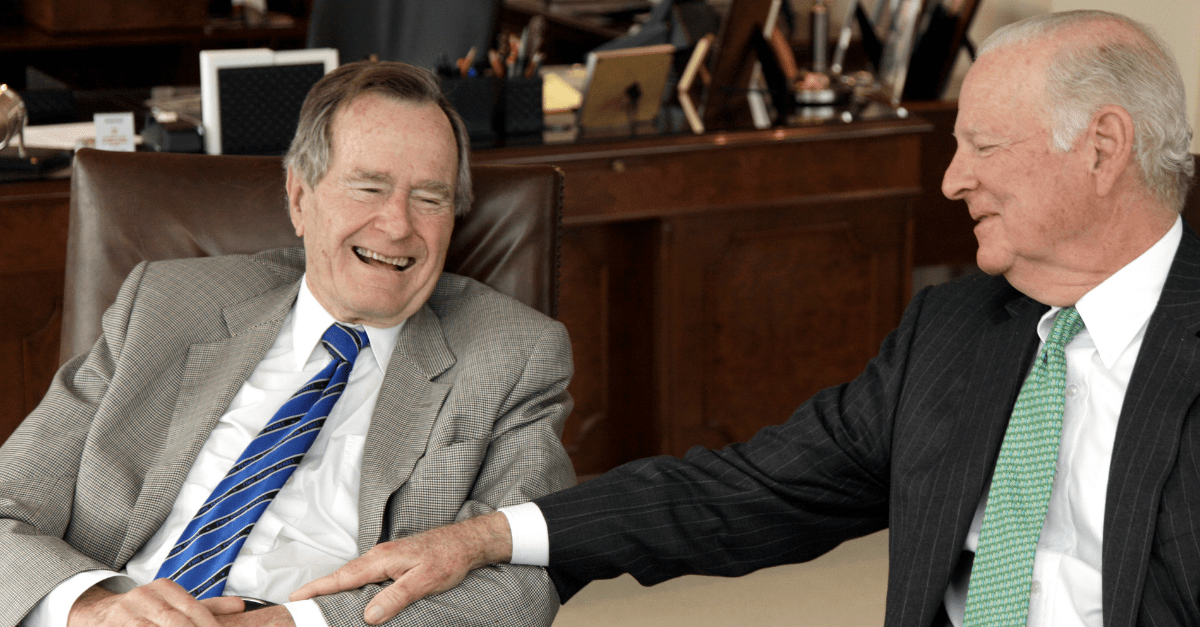 WASHINGTON (AP) ? George H.W. Bush didn’t lose his sense of humor even as he was letting go of life.

Surrounded by loved ones Friday night as he lay in bed at home in Houston, he was approached by the wife of his longtime friend, James A. Baker III, who was in the room with her husband. She raised a hand and placed it on the former president’s forehead before telling him, “We love you very much, Jefe,” using the Spanish word for “chief” that her husband says he used to address Bush.

“And he cocked one eye open and quipped, ‘Well, you better hurry,” James Baker recalled Sunday as he described the 41st president’s final hours of life. “His sense of humor was intact right up till the very end. His passing was really very peaceful. No struggling, no pain at all.”

His passing ushers in nearly a week of remembrances and tributes in Washington, where Bush will lie in state at the U.S. Capitol following a ceremony there Monday evening. A memorial service is set for Wednesday at Washington National Cathedral before Bush is returned to Houston to be laid to rest Thursday at his presidential library at Texas A&M University in College Station. He will be buried in the family plot alongside Barbara Bush, his wife of 73 years who died in April, and Robin Bush, the daughter they lost to leukemia in 1953 at age 3.

Bush’s final day of life began with a visit from Baker, who had served him as secretary of state and White House chief of staff. He expected to see Bush asleep when he stopped in at 7:15 a.m. to check on his former boss.

“But he was alert,” Baker said during a blitz of appearances on five Sunday talk shows. Bush hadn’t left his bed in the past three or four days and also hadn’t been eating. But, on the morning of his friend’s visit, he downed a big breakfast consisting of three boiled eggs, yogurt and a pair of fruit drinks. “We all began to think, ‘Here we are. He’s going to surprise us again. It’s another bounce-back day.'”

Bush had been in and out of the hospital in recent years, primarily due to the Parkinson’s disease that Baker said hampered his body’s ability to get rid of phlegm, often causing pneumonia. But each time he was hospitalized, each time loved ones thought that time might be the last, Bush rallied and was released, free to return to his home in Houston or the family compound in Kennebunkport, Maine.

There would be no bouncing back this time.

“By the time he got back here to Houston from his summer in Kennebunkport, I think he was pretty much ready to go. The quality of life had deteriorated a lot for him,” Baker said.

While he and his wife, Susan, were on the way home after dinner, Baker said he was called back to Bush’s bedside.

After it became clear that death was imminent, they got all the Bush kids on the phone, with son Neil Bush the only one in the room. Each one spoke to the former president and “he mumbled back,” Baker said. Another son, former President George W. Bush, was the last on the line, telling his dying father how much he loved him and promising they would see each other again in heaven.

Baker said when his presence was announced to Bush earlier Friday, “he opened both eyes. He looked at me, he said, ‘Bake, where are we going today?’ I said, ‘Well, Jefe, I said we’re going to heaven.’ He said, ‘Good, that’s where I want to go.'”

“Little did I know or did he know, of course, that by 10 o’clock that night he’d be in heaven,” Baker said.