Would you like to meet the plant of your nightmares? It’s not this guy…

… but it’s not great either.

Soon to be Virginia Tech freshman Alex Childress, 17, was working his summer landscaping job in the Fredericksburg, VA area when he came across what he thought was a large weed. Childress then grabbed some trimmers and chopped the plant down. When he did, part of it brushed across his face. Thinking nothing of it, Childress picked up the plant and hauled it away.

Then his face melted off.

“When I got home I walked inside and Alex, he was like, ‘I got really bad sunburn,'” Jason Childress said in a phone interview Thursday. “And Alex doesn’t burn. He tans.

“The top layer of skin on the left side of his face basically was gone and appeared to be like a really bad burn that had already peeled,” Childress added as he described his son’s condition.

It turns out that the plant Alex Childress chopped down wasn’t any weed, but rather some weird, totally unnecessary demon shrub called Giant Hogweed. From simply brushing up against it Childress’ face suffered second and third degree burns. Somehow this was relatively fortunate for Childress, as Giant Hogweed sap can cause much worse, including permanent blindness.

On Tuesday night Alex’s family took him to the Spotsylvania Medical Center, where he was then transferred to VCU’s burn unit. Childress is being discharged today after receiving intensive care. His recovery, however, won’t be fun. He will have to limit his exposure to sunlight and wear high SPF sunscreen in order not to make the burns worse.

How to Avoid Giant Hogweed 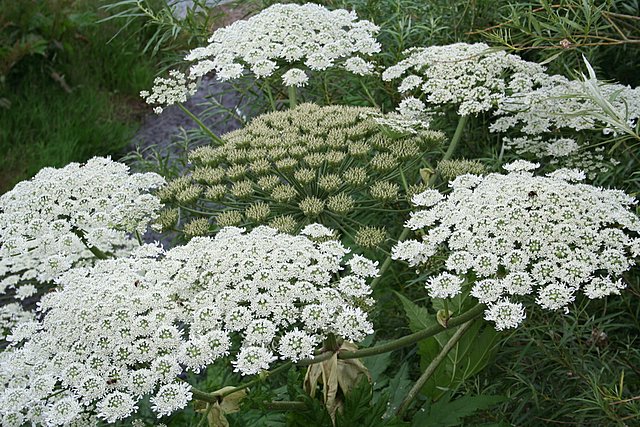 DO NOT TOUCH IT. That’s pretty much it. It’s a big green plant with little white flowers. Here’s a picture of what not to touch:

If you do touch it, however, be sure to wash the affected area with soap and water thoroughly before allowing that skin to be exposed to sunlight for any length of time.

But what is Giant Hogweed, besides the actual version of “The Devil’s Lettuce”? It’s a big dumb plant with phototoxic sap.

According to Wikipedia, Heracleum mantegazzianum, or Giant Hogweed plant — which is also known as cartwheel-flower, giant cow parsnip, hogsbane, or giant cow parsley and not, somehow, as “The Burning Bush” — is a phototoxic plant and considered a noxious weed in the United States that, for unknown but presumably very stupid reasons, became a common ornamental plant in Britain in the 19th Century. Though it is native to the Caucasus Mountains in central Asia, hogweed has spread to Europe, Canada, and North America, and is considered an invasive plant.

And it will melt your skin off.

Giant Hogweed: Not even once.

This story was originally published July 18, 2018.