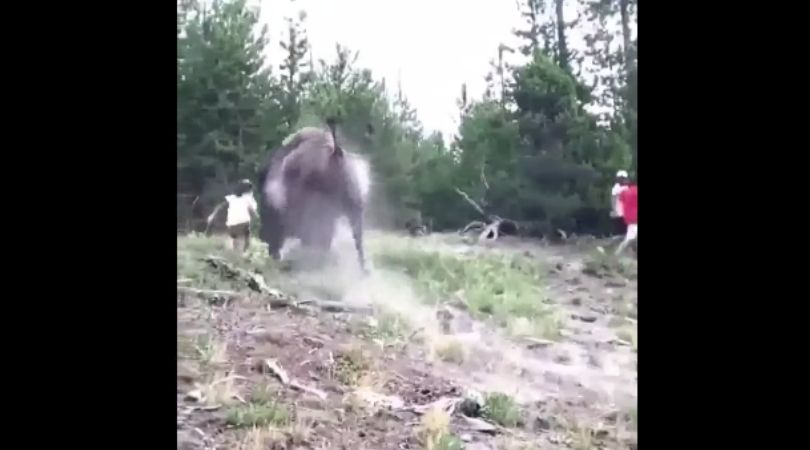 An Odessa, Florida family on a trip to Yellowstone National Park had about the most egregious lapse in parental judgment possible when the parents, with their 9-year-old daughter in tow, decided to mosey on up to a giant, impossibly strong, and instinctively defensive animal and just sort of hang out. The full-grown bison bull they were bothering/terrifying was not happy to have them and the other fifty oblivious gawking tourists there, however. Presumably, because thousands of years of interactions with humans have taught his species that a group of people milling around typically ends in being riddled with arrows, spears, and bullets.

So the bison did what any sensible animal concerned with self-preservation and capable of tossing smaller, chattering, naked monkeys around like ragdolls would do. It decided to wreck shit. Unfortunately “shit” in this instance was the 9-year-old girl the parents dragged right up to the bison. Typically it does not bode well for a 50-pound living thing when another, monstrous animal that weighs 2,000 pounds on average and is capable of running 30 miles per hour puts it in their crosshairs.

Maybe on their next vacation, they should take a family stroll through the middle of an active demolition derby instead.

The girl was treated by medical staff at the park before being taken to a hospital, treated some more, and ultimately released. She’s okay. Undoubtedly shaken up and bruised to hell, but in a general sense, she’s fine. Thank God.

The National Park Service, for what it’s worth, advises that visitors should stay at least 25 yards away from large animals like bison. Park visitors should not, it turns out, wander cluelessly by them like they’re a mall kiosk.

No citations were issued in response to the incident but it stands to reason that the family and the other people nearby learned their lesson. Of course, that won’t stop some different tourist from trying to take a selfie with a buffalo in a few months and leaving Yellowstone with a colostomy bag as their new forever accessory.

This story was originally published July 24, 2019.