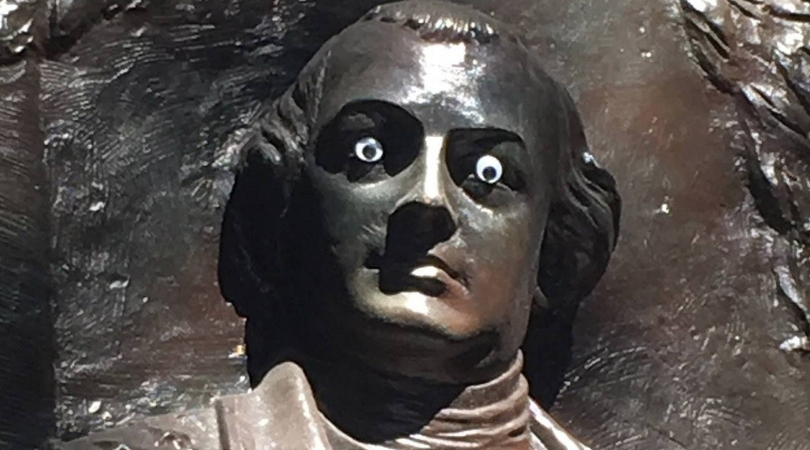 A group of hilarious, mischievous rascals decided a monument of Nathanael Greene needed a little makeover, so they did what any 14-year-old (at least I hope they are 14) would: add googly eyes. City employees found the 50-foot white marble obelisk defaced, with a pair of hilarious googly eyes, adding a comical flare to the statue. It’s safe to say officials were not that happy about the incident, asking the city for help to catch these ‘terrible pranksters’.

The City of Savannah Government took to Facebook to ask for information on finding these terrible terrible people, writing “Who did this?! Someone placed googly eyes on our historic #Nathanael Greene statue in #Johnson Square. It may look funny but harming our historic monuments and public property is no laughing matter, in fact, it’s a crime.”

The city’s post quickly went viral gaining more than 8,000 comments and shared by more than 33,000 residents. Authorities were alerted to the googly eyes on the statue on October 11, after local media saw a photo of the Revolutionary Hero online. Safe to say the eyes were quickly removed, and thankfully, no damage was done to the statue. But, officials did state that although there was no physical damage to them, the act is still “technically trespassing”.

Authorities are reviewing cameras around the area to see if the incident was captured, and a police report has been main. Criminal trespass is considered a misdemeanor offense unless there is damage over $500, which is then considered a felony called criminal damage to property.

Greene was one of the most respected generals of the Revolutionary War and a military strategist. He was commander of Southern Department of Continental Army, leading a campaign that stopped British from occupying the South. Major General Greene didn’t actually fight a battle in Georgia, but his leadership was what helped turn the tire to American Victory, and the freeing of Georgia from British forces.

Greene died in Savannah on June 19, 1786, and is the inspiration behind Greene County in Georgia, 100 miles east of Atlanta. The monument of Greene was erected in 1953, and his remains are buried beneath it.