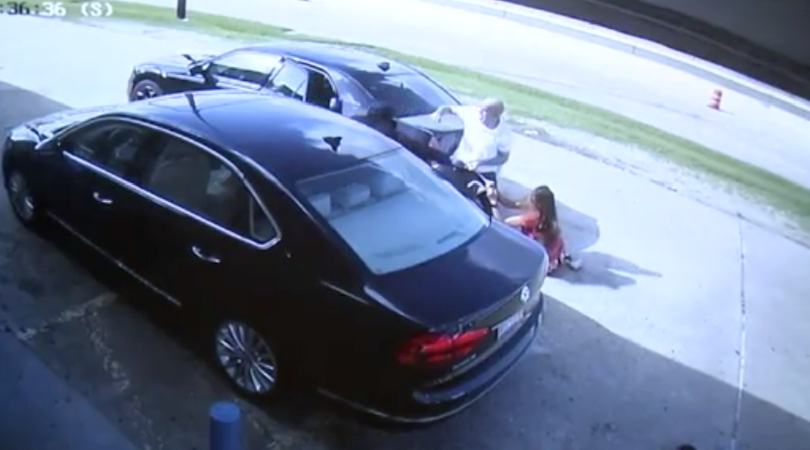 Authorities in Spring, Texas released a shocking surveillance video showing a group of thieves attempting to steal a woman’s purse full of money. According to authorities, the woman had $75,000 inside at the time. The woman, who has yet to be identified, is seen getting out of her vehicle with her purse held close to her, proceeding to go into the business. Before she is about to enter, a sports utility vehicle drives up beside her and a man is seen getting out and run towards her trying to steal her purse.

According to the Miami Herald, before she arrived at the check cashing business, the woman went to the bank and took out the cash for “legitimate business reasons.” Police believed she was followed from the bank by the thieves in the black SUV. The video shows a total of two vehicles pulling up to the business, one identified as a Chrysler 300.

The woman’s husband, who was inside the business at the time, saw the incident and ran outside attacking the robbers. The wife and husband attempted to fight off the first robber by gripping on to the purse, when the second robber ran off around the car, get in and reverse the vehicle over the couple.

Constable Mark Herman of Harris County Precinct 3 stated one of his deputies saw what was going on from a distance and immediately ran to the scene of the incident. The deputy was able to arrest one of the suspects, identified as 31-year-old David Dowell Mitchell, and was charged with aggravated robbery. The second suspect drove off the scene, but authorities stated cameras were able to capture his face clearly. They are now seeking information about the individual.

As for the money, the woman was able to hold on to the bag the entire time. She was transported to the hospital where she was said to be in critical condition after the incident but is now expected to make a full recovery. Her husband was treated at the scene for minor injuries. If you have any information about the incident you are asked to contact the Harris County Precinct 4 Constable’s Office or Crime Stoppers of Houston by phone at 713-222-8477 (TIPS).