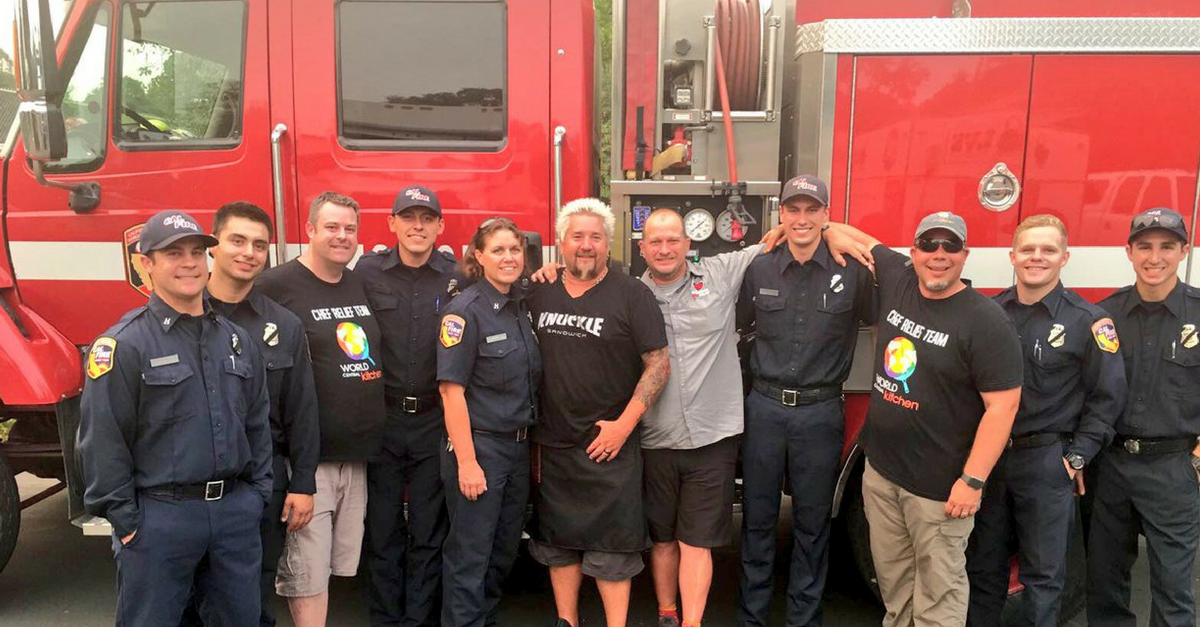 People displaced by raging wildfires in Northern California, including the rapidly spreading Carr Fire, have been given at least one small comfort in their hour of need: an invitation to Flavor Town.

Celebrity chef Guy Fieri, a Northern California native and definitely not a Golden State Warriors bandwagon fan, has teamed up with the Salvation Army, Operation BBQ Relief, The Red Cross, and others to cook for hundreds of displaced residents, as well as firefighters battling the California Wildfires.

Read More: Using the Walmart App While Grocery Shopping Gets You Paid (Seriously)

This past week the Food Network star and host of Diners, Drive-ins and Dives casually took to Twitter to thank other organizations for helping to provide food to the California Wildfire evacuees in Shasta County, California.

Big thanks to the Cattlewomen of Humboldt for a great beef donation for the Redding evacuees! pic.twitter.com/Wb4kwsZqqL

Teams @OpBBQRelief and #WorldKitchen are feeding our friends in Redding. Team Knuckle Sandwich is off to feed the evacuees in the Lake County fire. Big thanks to everyone making this happen! pic.twitter.com/Q1D01IO1Hj

Chef James from Sheraton Redding Hotel stepped up HUGE with pasta salad and coleslaw for 1000 people for lunch and in for another 1000 tonight. Real deal!! @sheratonhotels pic.twitter.com/KXM8d4aJZs

Chef José Andrés, who was on the ground cooking in Puerto Rico after the devastation of Hurricane Maria, was also in Redding to help serve firefighters and feed evacuees in the Shasta College parking lot.

Kudos to Guy Fieri, José Andrés, Guy Fieri’s kids, and everyone else helping out the fire crews and displaced residents. Having Guy Fieri cook for me would absolutely, one hundred percent help dull the pain of having my home and all my possessions destroyed in a fire. There’s nothing like a Jalepeño Popper Burger topped with Dragon Mayo and fried onions, on a pretzel bun, with a side of Korean Chili Fries and washed down with a peanut butter milkshake to take my mind off my homelessness. (But actually that sounds amazing and it would make me feel better.)

This is pretty par for the course for the Food Network Host, who on a regular basis lends his skills, money, and celebrity to charitable causes, and always without making a big deal out of it. It’s the only time the man isn’t loud.

MEETING OF THE MINDS
Here stands the intersection of three amazing teams. We are working in unison to provide for the people in need in Redding California. @GuyFieri @chefjoseandres @WCKitchen and Operation BBQ Relief's own Dewayne Daniel are meeting to plan meals for Tuesday pic.twitter.com/mocpwQsKmT

Guy Fieri may, for now, only be the Mayor of Flavor Town, but in the hearts of true red-blooded Americans everywhere Fieri is the Commander in Chief of the United States of Flavor, est. Seventeen Seventy Licks.