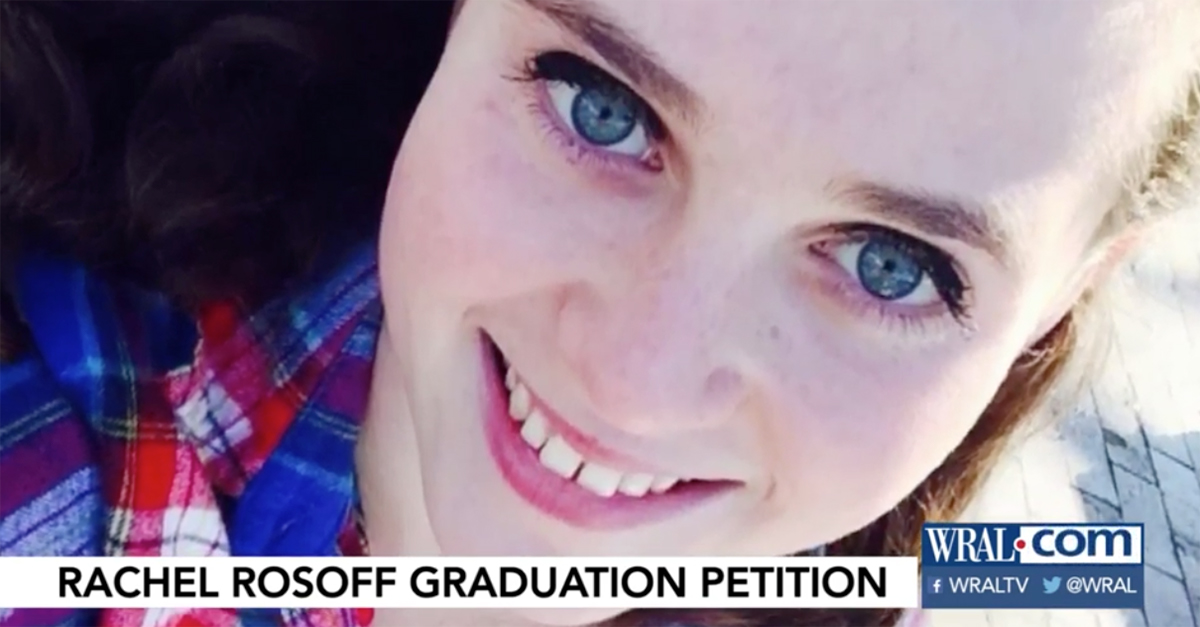 Parents of a 17-year-old student who tragically died last year requested that her school recognize her at its graduation ceremony. But the North Carolina high school told them it would be inappropriate.

Rachel Rosoff was fatally electrocuted in a pool last September. Her parents contacted the principal of William G. Enloe Magnet High School about including their daughter in the graduation ceremony.

Principal Will Chavis told the family he would not do that.

In an email, Chavis told the family that acknowledging Rachel may cause students to “react in ways that would take trained professionals (i.e. counselors) to support.”

RELATED: A college student tragically died in a freak accident while volunteering at a track meet

The email continued: “Because Graduation is meant to be a ceremony for students’ accomplishments and a celebration thereof, we want to ensure that the ceremony maintains a happy, vibrant feel.”

So this is the e mail i received from the principal at Enloe regarding Rachel Rosoff graduation. This is so disheartening and a dahm shame. Wake county should be ashamed

Posted by Michelle Schwartz Rosoff on Wednesday, May 3, 2017

The family disagrees with the principal’s point of view. Rachel’s sister, Jordana Rosoff, launched a petition on Change.org last week in response to get the high school to reconsider. The petition has now received more than 8,700 signatures.

RELATED: Chilling text messages reveal Penn State frat brothers were aware he needed help — what they did instead is sickening

“They feel it may cause sadness and bring people down on a day that is suppose to be celebratory,” Jordana Rosoff wrote. “They want to pretend that she did not exist, which not only hurts me, but my family and her friends.”

Even the students seem to be at odds with their principal. One student, Alissa Brasington, told news station WRAL, said students are mature enough to handle the situation.

“I think we are old enough to be okay and understand what is going on,” Brasington said. “I think we’ll be OK if they mention her. It will actually be better than if they don’t mention her.”