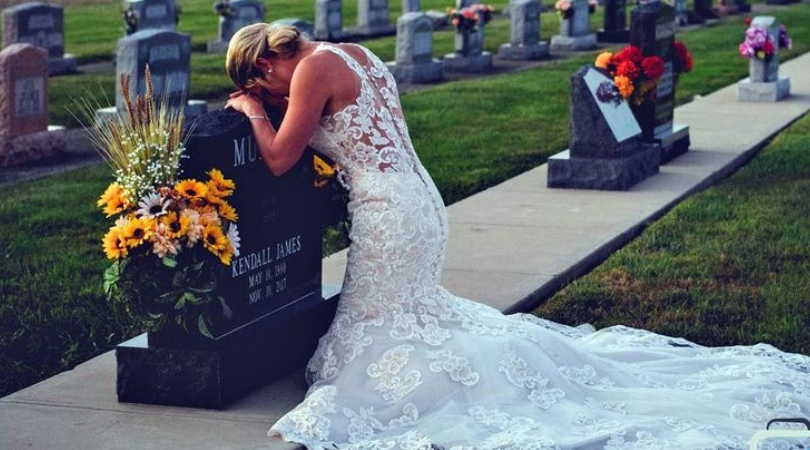 Heartbreaking photos of an Indiana bride on her wedding day are going viral. The photos show her breaking down next to a grave. September 29, 2018, was supposed to be an unforgettable day for Jessica Padgett and Kendal Murphy, but a year before their wedding day Murphy suffered a tragic death.

On November 10, 2017, Murphy, a volunteer Montgomery firefighter, was killed while helping a crash victim stuck on a road in southwest Indiana. Murphy was struck by another responding firefighter who was driving with a 0.21 percent blood alcohol level in Davies County. Murphy’s death was devastating to the bride, his family, and the entire community, who remember the fighter as someone who ?gave his all in everything he did.?

Katrina Murphy, Kendall’s mother, stated she decided to contact photographer Mandi Kneep from Loving Life Photography after his death, and asked if she would do a photo shoot with Jessica on the day they planned to wed. This as a way to honor Kendall and help Jessica with the healing process.

Mandi decided to go along with the photos, and Jessica got ready for her ?special day? by doing her makeup and putting on her dress. She posed with several of Murphy’s belongings including his helmet, uniform, and boots. Jessica was also given a stack of letters from the community her best friend asked people to write in support, recieving enough to read one per day for the next six months.

Both the best man and Jessica’s maid of honor gave a speech during the photo shoot and thanked the family members for being there. Jessica released a statement to her facebook thanking the community and her family, stating, “I can?t say thank you to everyone enough for this entire week! I feel beyond spoiled and loved. This week wasn?t the outcome I wanted, but everyone made me feel especially loved….Thank you, everyone, for making my wedding day special even though I didn?t get to marry the man of my dreams.”

Kendall was one of the five firefighter from Indiana honored at the National Fallen Firefighters Memorial Service in Washington. St. Peter Catholic Church and the Montgomery fire Station ?painted the town red? to honor Murphy.