Bravest Thieves Alive Leave Cop Car Up on Blocks, Run Off With Tires 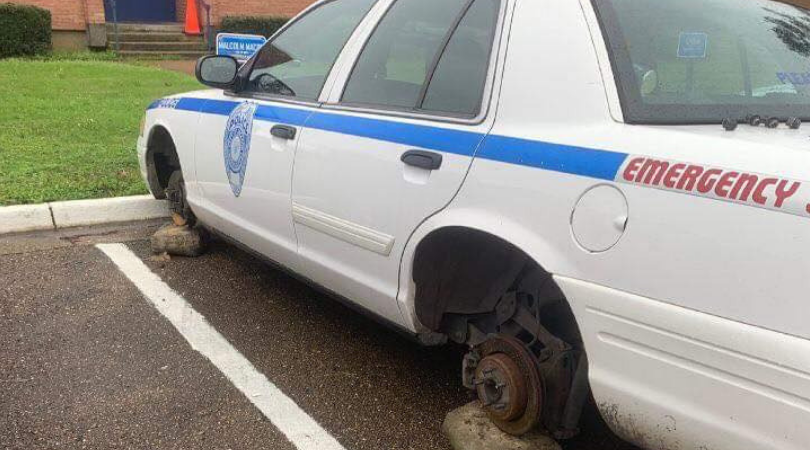 This is impressive. There’s no other way to describe it. The balls on these thieves must be the size of boulders. Stealing the wheels off a cop car, and one parked at the station, no less, is so incredibly daring and slick and hilarious that Danny Ocean himself would be proud.

This has to be a pure troll job because there’s no way the tires on a Jackson Police Department training vehicle were worth much. Definitely not enough to risk getting caught over. It wouldn’t be surprising to learn this was part of some fraternity’s pledgeship. Or a right of probie initiation for Jackson firefighters. If someone really did steal these tires purely for the money then… someone needed meth real bad.

Oh to be a fly on the wall of that police station as the captain ripped a thousand new buttholes into everyone who was on duty while those tires were stolen. It must’ve been a verbal massacre. There’s no way any cop walked out of there with even an ounce of self-esteem. Only tears and self-loathing emerged from that meeting.

According to police, no arrests have been made in the case. They might not even have any leads. They’ve been thoroughly owned here. And it’s not like these tires are going to be easy to find. Do you know how many rimless, black, crappy looking tires there are in Mississippi? Every car owner is a suspect.

Meanwhile, somehwere there’s probably some guy waking up from the drunkest night of his… month at least, with four newly acquired (but by no means new tires in his backyard). Thankfully for him he’ll never be a suspect because if every homeowner in Mississippi who had old tires on their property were a suspect then every homeowner in Mississippi would be a suspect. This may be the most unsolvable crime in the history of the state.

Watch: Watch this bomb squad blow up a car to teach police cadets a thing or two about explosives