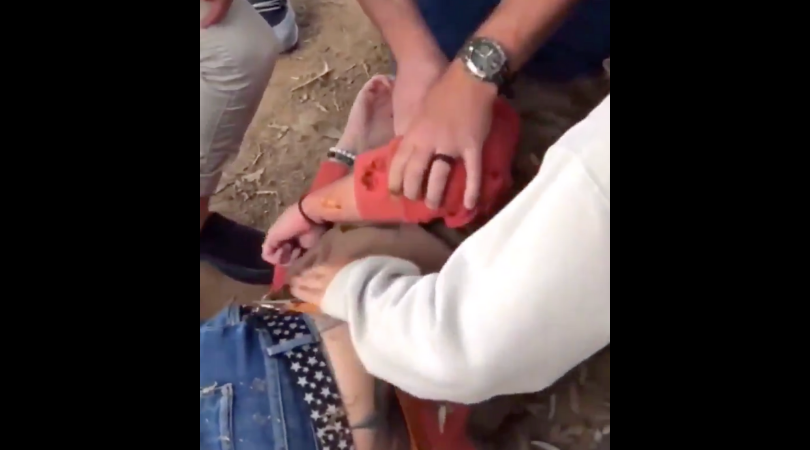 Jaguar attacks are up one billion percent in Arizona after a woman was badly mauled by a jaguar at the Wildlife World Zoo in Maricopa County. The attack happened when the woman climbed over the barrier separating the public from the jaguar’s enclosure in order to take a selfie with the big cat in the background. The female jaguar, however, was not into it the woman’s selfie game and quickly pounced, grabbing a hold of and slicing into the woman’s arm with its claws.

Bystanders heard the woman screaming for help and ran over to free her but, at first, the jaguar’s grasp was too strong. Thinking quickly, another woman threw a water bottle into the jaguar cage to distract the wild animal, which it did long enough for those attempting to save the woman to pull her away. Despite their efforts, though, the woman was already badly cut. Though the woman was seriously hurt she did not suffer life-threatening injuries.

A video taken by Adam Wilkerson, one of the bystanders who helped pry the woman from the clutches of the apex predator she was trying to get some pics with, shows the woman writhing in pain while being helped by another zoo visitor. The video was shared on social media by Fox 10 in Phoenix.

Zoo officials announced on Twitter that the jaguar would not be put down because the attack was so obviously the like seeking woman’s fault and not the wild animal’s fault. The Arizona zoo reminded guests that proper barriers are put up in front of the jaguar enclosure and other enclosures for a reason, that reason being that people do not get ripped to pieces by the animals on the other side of them.

We can promise you nothing will happen to our jaguar. She’s a wild animal and there were proper barriers in place to keep our guests safe- not a wild animals fault when barriers are crossed. Still sending prayers to her and her family.

All in all another solid interaction involving a person, a cell phone, and something deadly.

This story was originally published March 11, 2019.