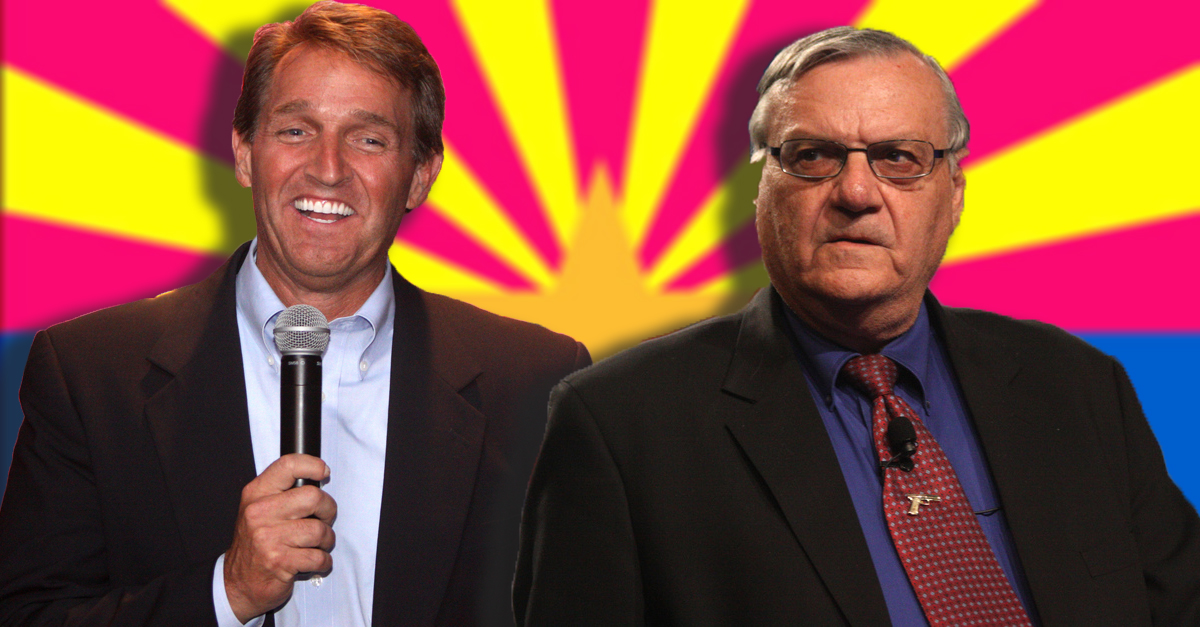 In our current political climate, it seems that the nation is partisan to a fault–so much so that somewhat obscure figures are finding themselves in the spotlight. The latest duo to tangle in the arena of back-alley politics is Sheriff Joe Arpaio (who was pardoned by Trump after he refused to obey a court order aimed at racial profiling) and the son of Senator Jeff Flake, R-AZ.

Austin Flake claims that Arpaio pursued felony animal cruelty charges against him and his ex-wife solely for the purpose of damaging his father’s political career. In 2014, Flake and his wife were looking after a kennel that her parents owned; during the night, an air conditioning unit broke, and 21 dogs died from heat exhaustion.

The lawsuit claims that Arpaio, who was then a sheriff in Arizona, looked over Flake’s phone records hoping to tie the incident to his father, The Associated Press reports. The senator’s son hired a team of lawyers who beat back the claims, and the charges were dropped at the request of prosecutors. Eventually, Flake’s former in-laws pleaded guilty to animal cruelty charges when investigators determined that the air conditioning unit was not properly maintained.

A court date is set for Dec. 5, when Flake’s attorneys will argue that Arpaio’s motive in prosecuting him had little to do with the dead dogs and a lot to do with smearing his senator father. Flake’s attorney said, “It splashed their names across the internet as the murderers of 21 dogs. It really ravaged them emotionally.”

But, Arpaio defended his stance in a 2016 deposition, saying, “I am going by what my detectives accomplished during their investigation. They had the nuts and bolts already. I defend my people. I have confidence in them. I don’t have to know everything that’s going on.”

It’s unclear how much Flake is and his ex-wife are hoping to get in the lawsuit, but an early legal filing showed their target as $4 million.

Senator Jeff Flake has been one of President Donald Trump’s harshest critics on the right side of the aisle. Most recently, he was caught on a hot mic telling a friend in Arizona that the GOP is “toast” if it becomes the party of Donald Trump and Alabama Senate hopeful Roy Moore. When an article about that exchange was published, the senator tweeted a link to it with the caption, “No surprise here. I’ve been telling this to anyone who will listen.”

In a speech on the floor of the Senate, the Arizona legislator announced that he will not run for re-election, citing Trump as his reason for deserting politics. Flake pointed to the president’s “reckless, outrageous and undignified behavior,” and said, “Mr. President, I rise today to say enough. I have children and grandchildren to answer to. I will not be complicit or silent.”

Austin Flake’s lawsuit isn’t the first time that Arpaio has been accused of being over-zealous in an attempt to gain publicity. In 2007, he tried to pursue charges against a police officer when a dog was left in a hot car and died. The officer later sued the sheriff and a taxpayer-funded settlement of $775,000 was reached.