Just two weeks before a deadly train derailment, a local mayor had a chilling warning 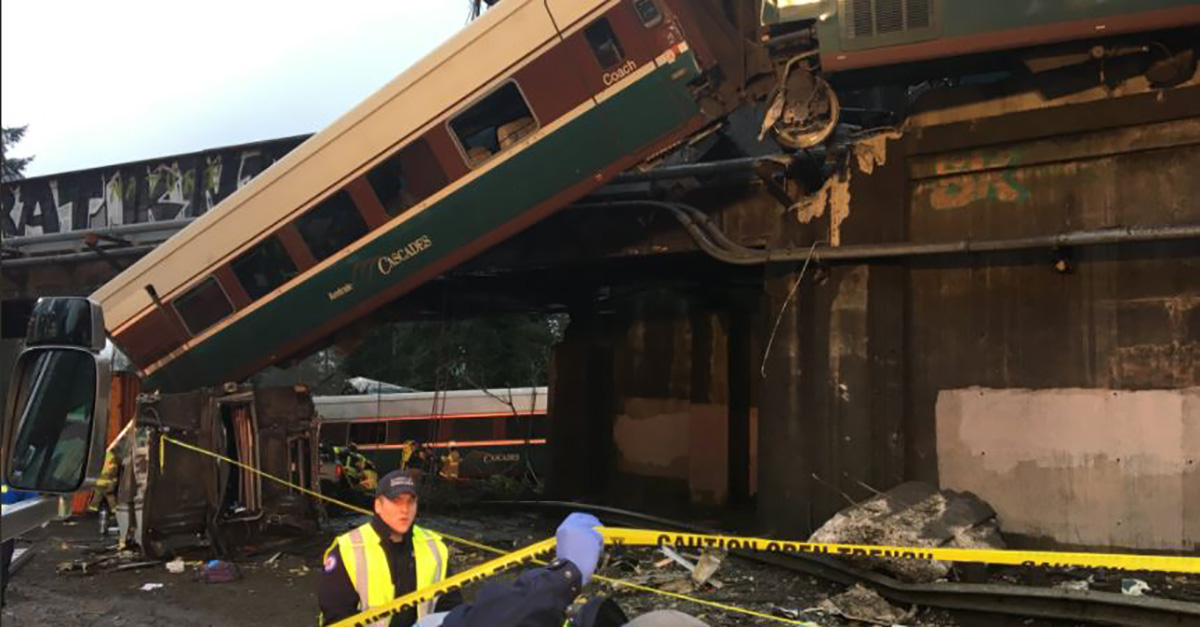 Authorities are reporting multiples casualties in an Amtrak derailment this morning in Washington state, and according to previous reports, city officials were concerned weeks ago.

Amtrak 501 derailed leaving DuPont, Wash. on an overpass. A reported 78 passengers and 5 crew members were aboard the train traveling during rush hour, according to CBS News. The Associated Press is confirming “at least 6 killed” according to a United States official. Amtrak 501 was reportedly going 81 mph — the speed limit was 79 mph.

Although the Pierce County Sheriff’s Department confirmed that there were fatalities, neither they nor Amtrak has disclosed the exact numbers of injuries and deaths. They did, however, reveal that no fatalities were reported from the interstate — all deaths occurred aboard the train.

The Amtrak 501 was rerouted in the previous months — the train was on its inaugural journey on this new route Monday before it derailed.

City officials expressed concerns in early December over the new route, which was touted for its high-speeds and ability to cut down on commute times.

Mayor Don Anderson of Lakewood, Wash., expressed his concern after WSDOT officials gave a presentation on the new track changes. Anderson warned the DOT to include grade separations to keep trains away from motorists on interstates below, or a major accident would occur, KOMO News reported mere weeks ago.

RELATED: Early images of the major Amtrak derailment in Washington this morning do not look good

“Come back when there is that accident, and try to justify not putting in those safety enhancements, or you can go back now and advocate for the money to do it, because this project was never needed and endangers our citizens,” said Mayor Anderson.

According to Chris Karnes, a passenger on the train, riders had to kick open the windows on train cars to get free.

?We had just passed the city of DuPont, and it seemed like we were going around a curve,? Karnes told CBS News. ?All of a sudden, we felt this rocking and creaking noise, and it felt like we were heading down a hill. The next thing we know, we?re being slammed into the front of our seats, windows are breaking, we stop, and there?s water gushing out of the train. People were screaming.?

Washington Gov. Jay Inslee declared a state of emergency according to CBS News.

RELATED: Woman dies after slipping and being hit by a Metra train in Elgin

“Today’s tragic incident in Pierce County is a serious and ongoing emergency,” he wrote in a statement. “Trudi and I are holding in our hearts everyone on board, and are praying for the many injured. They are our top priority, and I know first responders are doing everything to ensure everyone has the care they need.”

Although not yet confirmed, there is speculation that Amtrak 501 was allegedly speeding along a curve when it derailed. Amtrak train 188 was traveling through Philadelphia when it careened off the tracks on May 12, 2015, after similarly speeding along over a curve in the tracks. Eight people were killed and over 200 injuries were reported in the harrowing accident. Engineer Brandon Bostian was brought up on eight counts of involuntary manslaughter and other crimes including causing a catastrophe and reckless endangerment, according to NPR.