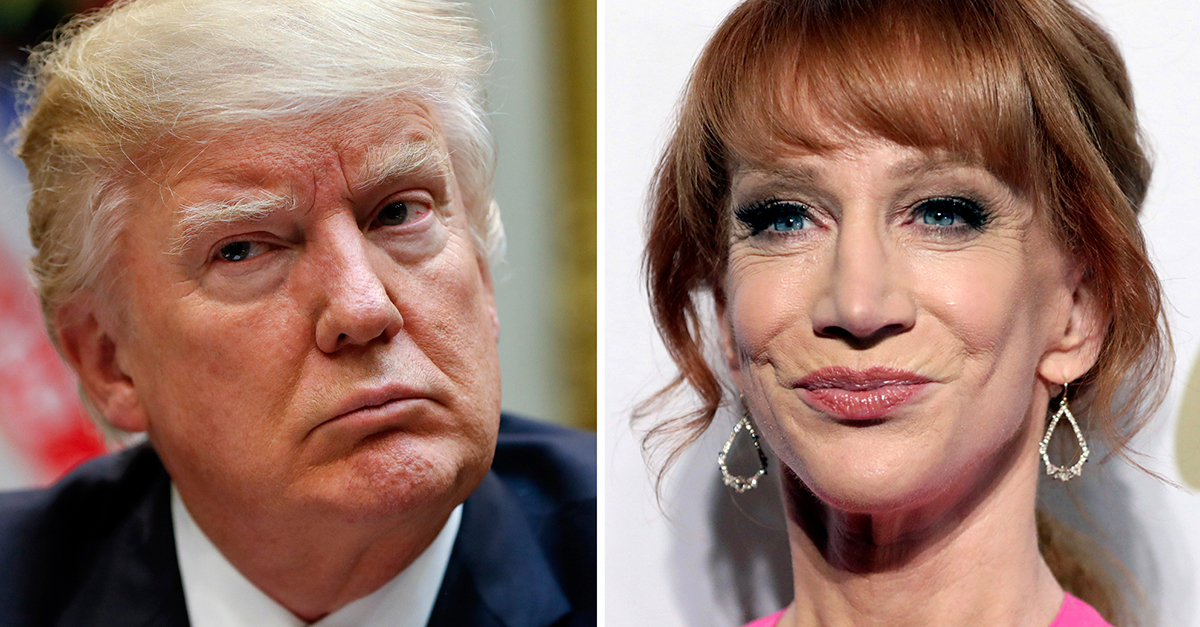 Comedian Kathy Griffin thinks that there’s only one person behind her bad luck in 2017: President Trump.

Griffin first made headlines when she tweeted a picture of herself holding a bloody, decapitated head of the president in May. The bloody image was criticized not only by the president’s supporters, but several of his critics as well.

This week, Griffin was included in a story published by Politico about the various people Trump tweeted about this year.

As observed by The Daily Caller, Griffin blamed Trump for spreading the picture: “The photo was on TMZ, then Drudge tweeted it, and then Don Jr. retweeted Drudge … But the president’s Twitter feed is the greatest programming director ever. The minute he tweeted that tweet about me, it was literally breaking news on every channel.”

Kathy Griffin should be ashamed of herself. My children, especially my 11 year old son, Barron, are having a hard time with this. Sick!

She also accused Trump of using her “as a tool to distract from his bad news of the day,” referring to the oddly-timed firing of former FBI Director James Comey.

“I think it would have been gone in a week without his tweet,” she added. “Trump knows what would be perceived as something hysterical, and he loves hysteria. There are millions of people who think I’m a member of ISIS to this day.”

Griffin experienced a loss of venues for the American leg of her comedy tour. She also blamed this on the president’s tweet.

“I wish I could tour in the U.S. without getting shot — I know I can’t. I was in the middle of a 50-city tour when the tweet happened. It was canceled in 24 hours,” she said. She said she received a warmer welcome overseas.

Griffin had also co-hosted CNN’s New Year’s Eve special with anchor Anderson Cooper as early as 2007, but the network parted ways with the comedian shortly after she posted the scandalous picture. CNN released a statement saying that they found the image “disgusting and offensive.”

Cooper and Griffin’s friendship was also put on the rocks following the controversy. Cooper disavowed the image, saying, “For the record, I am appalled by the photo shoot Kathy Griffin took part in. It is clearly disgusting and completely inappropriate.”

It was announced in August that Griffin and Cooper’s long-term friendship was officially over following the scandal.

RELATED: Kathy Griffin unleashes on “Billy McRapey” after Bill O’Reilly reached out for an interesting request