Kids are the real winners at the end of the shutdown saga: 6 years of CHIP funding secured in agreement 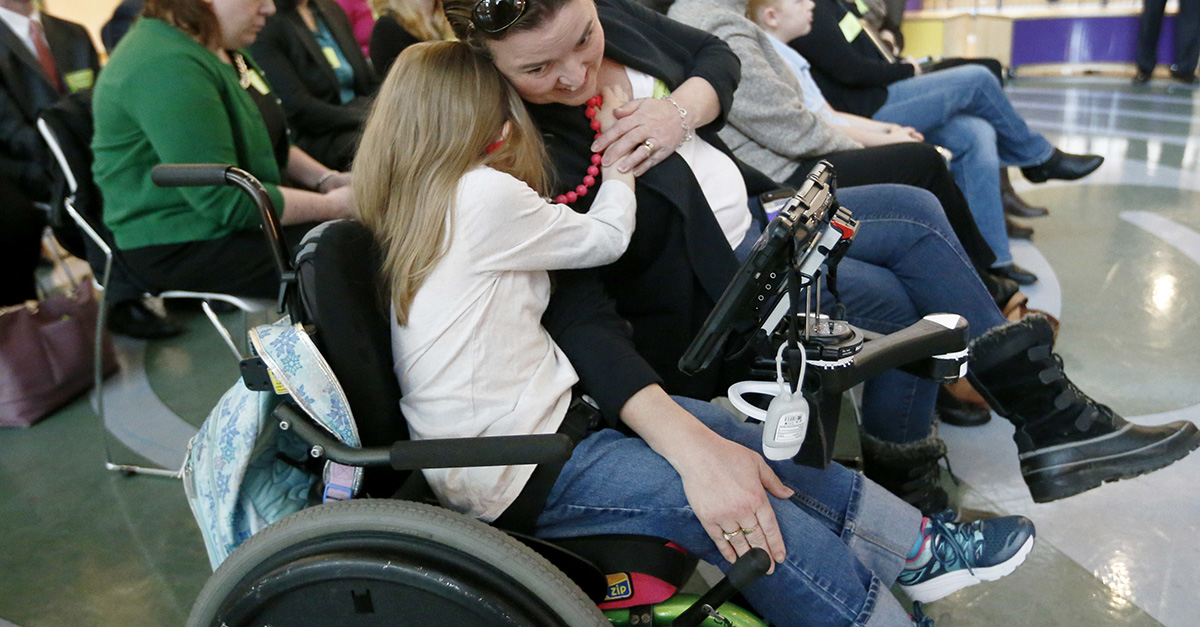 AP Photo/Keith Srakocic
Eight-year-old Abigail Gabriel, center, hugs her mother, Erin, from her wheelchair as Pennsylvania Department of Human Services Acting Secretary Teresa Miller, Thursday, Dec. talks about the Children's Health Insurance Program, CHIP, during a news conference, Dec. 7, 2017, in Pittsburgh. The gathering marked the 25th anniversary of the Pennsylvania program to provide health insurance to uninsured children and teens who are not eligible for or enrolled in Medical Assistance. Miller, local health care providers, and families with children using CHIP spoke to call on Congress to reauthorize the program for children who rely on the health care coverage. Abigail has healthcare under Medicaid. (AP Photo/Keith Srakocic)

Amid the shutdown furor and immigration impasse of the last few days, one piece of the puzzle has gone overlooked by most: funding for the Children’s Health Insurance Program (CHIP).

Under the bill signed by President Donald Trump, the insurance program will get $21.5 billion this year and a total of about $124.2 billion though 2023. It quietly takes the health of millions of children out of the Congressional budget fight and relieves the panic of state governments that have been scrambling since September.

Congress did pass a short-term funding solution for CHIP in late December, but that only included enough money for most states to get through mid-January, leaving what has been a non-controversial, bi-partisan program caught in the crossfire of the unrelated budget and immigration fight. According to Washington Post analysis, CHIP was considered too valuable of a bargaining chip to go ahead and renew funding for a successful program that’s helping millions on its own.

In the fall, Republicans proposed a spending plan with five years of CHIP funding, according to the Post’s reporting, but Democrats resisted because GOP lawmakers wanted to pay for the extension through spending cuts, including to the Affordable Care Act and Medicare.

Created in 1997 as part of a balanced budget plan, CHIP provides matching funds to states to get health insurance for children in families with incomes too high to qualify for Medicaid but too modest to afford private health insurance.

States have substantial discretion over how to carry it out. In 26 states, CHIP runs jointly with Medicaid. It’s operated as a federally supplemented independent program in the other 17 states, such as PeachCare for Kids in Georgia. Five states — Colorado, Missouri, New Jersey, Rhode Island and Virginia — also provide coverage to pregnant women under CHIP.

Through the end of 2017 and beginning of 2018, states were running short of federal funds for CHIP at different paces. Nine states were out of 2017 CHIP-allocated money by Dec. 6 and were juggling other funds from Centers for Medicare and Medicaid Services to cover kids through the end of the year. Connecticut was the first to freeze enrollment just before Christmas; five more states notified families that they would soon do the same.

RELATED: As President Trump signs bill to end government shutdown, the rest is up to Congress