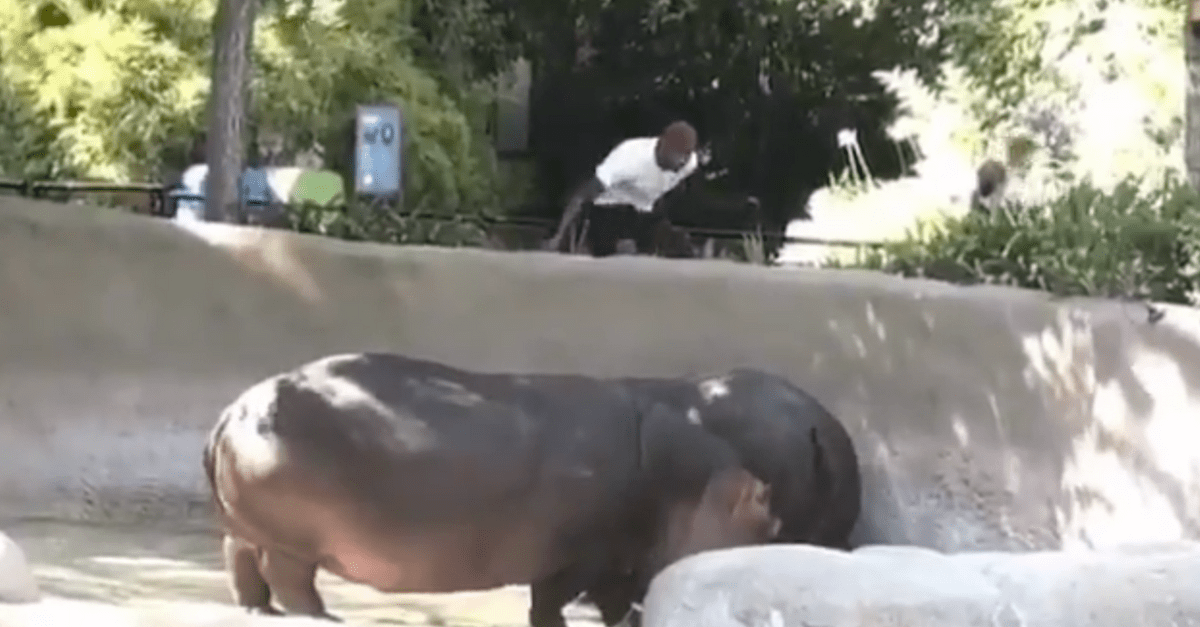 Both natural selection and irony were on their lunch breaks, apparently, because when a Los Angeles man jumped into the hippo cage at the L.A. Zoo and slapped a hippopotamus named Rosie on her behind he was able to escape the enclosure before Rosie and her friend could rip his legs off and play catch with his ragdoll corpse.

Watch This Man Jump Into the Hippo Cage

It’s all fun and games until they’re fishing your bones out of hippo stool so your family can bury as much of you as they can.

“Kevin died having achieved his greatest dream: going somewhat viral for doing something stupid. He will mostly be missed.”

Obviously, this guy doesn’t actually deserve to die, but this stunt is nonetheless a dick move and deserves some sort of comeuppance. He’s just being mean to an innocent animal. For the likes. Sure, he isn’t torturing the hippo, but that thing is just trying to hang out and enjoy its life. If you really feel the need to scare an animal go chase (but do not actually harm) some pigeons, they’re perpetually frightened anyway.

According to the Los Angeles Times, the video went somewhat viral on Twitter and has sparked an investigation by the LAPD.

LAPD To the Rescue

A video of a man climbing a barrier at the Los Angeles Zoo and then slapping a hippopotamus on its rear end has sparked a criminal investigation by the LAPD, officials said Monday. https://t.co/JgigGwusPf

At this point the hope is that they catch the hippo spanker and that this doesn’t become some sort of viral challenge — the #ZooSlapChallenge? — because then someone really is going to get ripped to shreds by an apex predator or 600-pound gorilla with the literal strength of Captain America.

It’s easy to imagine some kid shouting, “World Star!” before slapping an elephant’s ass and getting their skull crushed like a grape because they decided to do some dumb dance for extra lawlz instead of immediately sprinting out of the cage. All that while the person filming them keeps rolling instead of helping because their friend dying would get even more views than the slap would’ve.

The internet isn’t a good thing.

Editors Note: This article was originally published on August 15, 2018.