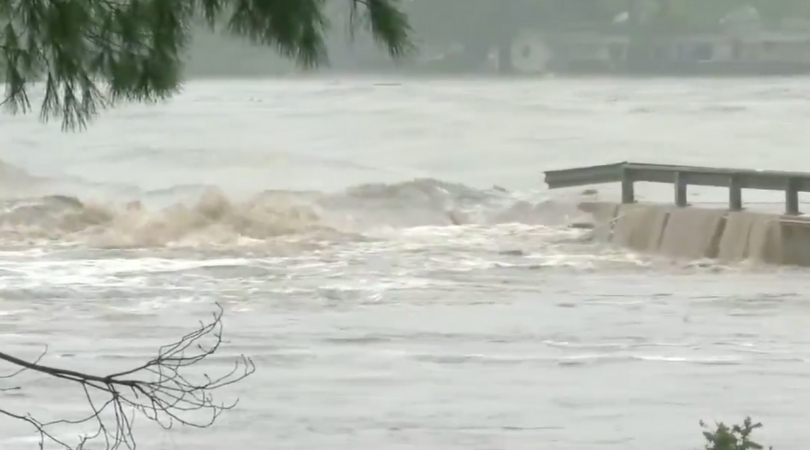 Texas, the state where the weather can be 54 degrees Fahrenheit on mile 119 and 103 on mile 201. It happens, it’s normal…it’s one of those things that Texans grow up getting used to. Recently, Texas has seen an unusual amount of rain, causing floods all around the state. Like in Kingsland, where a recent storm caused rushing water on the Llano River, to destroy a trafficked bridge in the area.

The FM 2900 Bridge in Kingsland completely collapsed Tuesday morning causing severe damage to the city. The Llano River crested at 39.9 feet on October 16, making it the highest height in more than 80 years! (YIKES! Take a chill pil, global warming.) The flooding led to a series of mass evacuation for people in multiple cities who live along the water.  Luckily for us curious ones, a video was taken of the bridge, and let me tell you, it’s impressive and terrifying all at once!

The Texas Department of Transportation in Austin stated the Kingsland Bridge was washed away after Llano County Emergency Management team reported that the bridge was at risk of flooding, due to the location. Authorities don’t know if anyone was injured in the process of the collapse, but footage 5 minutes after shows large pieces of the bridge poking out from underneath the flood waters. Just look at the bridge popping in and out of the water! Can you imagine being hit by something like that!

According to TxDOT, the bridge was built-in 1969 and was made of concrete and steel pilings with concrete decking. It was built to withstand a 50-year flood level. The bridge was last inspected in May 2017, in where it was deemed as “structurally sound.” TxDOT usually inspects bridges every two years.

Some parts of Texas have received months’ worth of rain in a span of 5 days, which is why a state disaster declaration has been issued for 18 Texas counties that were impacted by severe weather and flooding. Parts of central Texas have already received 4-8 inches of rain from Friday to Tuesday morning.

Authorities stated anyone living within one-quarter mile of the Llano River should evacuate the area and head to higher grounds. At least two people have died due to the flooding. One fatality was confirmed after a body was found in Burnet County Along the Colorado River between granite Shoals and Kingsland. The second body was recovered near a lower water crossing by Llano County officials.

BRIDGE COLLAPSE! The FM 2900 bridge over the Llano River in Kingsland has COLLAPSED in the river due to flooding https://t.co/vks3sWf7w4 pic.twitter.com/zIfJyvDD8O

Unfortunately, authorities need to wait for water to lower to inspect the damage and decide how to properly repair it. Experts did stated it will be a priority for the agency and repairs will be expedited. Until then, drivers are asked to use SH 71 or US 281 to go North or South, as well as RM 1431 once water levels have receded.