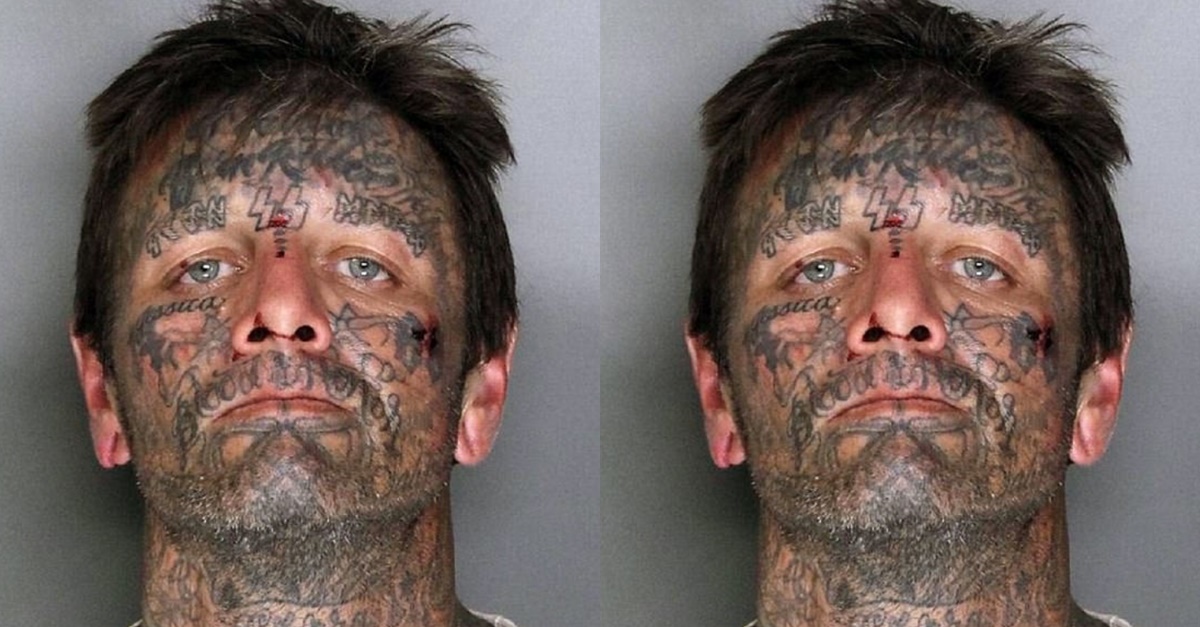 If you have a Nazi lightning bolt “SS” symbol tattooed between your eyes, you’re probably a Nazi.

Anthony Leon Rushing, 41, boasting, literally, a face full of white-supremacist tattoos allegedly tussled with two police officers after they approached him for jaywalking, leading to his arrest. Rushing was charged with resisting the police and violating parole in Rancho Cordova, California.

The officers spotted Rushing committing an “infraction relating to improper use of the crosswalk,” police said in a statement. The statement read: “Upon being contacted by the officers, Rushing fled on foot through the Zinfandel light rail station. Officers caught up with him in a nearby strip mall, where he engaged the officers in a violent confrontation.”

A “violent struggle” ensued and Rushing and the two officers fell to the pavement. Rushing allegedly punched one of the officers, who suffered a minor injury. Finally, the use of a taser subdued the jaywalking suspect. Police found a knife they believe the tattooed man dropped while fleeing.

Rushing turned his face into a canvas for offensive tattoos, including the words “Blood” and “Honor” on his upper lip and “Natural Born Killer” inked in cursive on his forehead. His chin is tattooed with the Othala rune, a symbol adopted by the National Socialist Movement in America to replace the swastika, among other white supremacist tattoos like the numbers “14” and “18.”

Rushing is currently being held without bail on a flash incarceration in connection with the alleged parole violation. However, it was unclear what the prior charges of his parole violation stemmed.