Giant Bundles Of Marijuana Wash Up On Florida Beaches 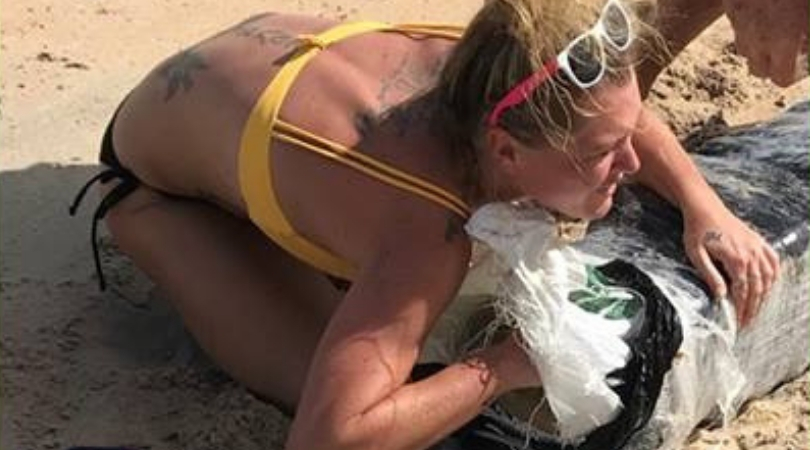 Oh Florida, you continue to amaze me every day. In today’s daily dose of ‘What in the world is happening in Florida?’, The Flagler County Sheriff?s Office is searching for a woman last seen on the beach who reportedly stole a bag of marijuana that had washed up last week. Yes, the blonde woman was seen in a photo with a yellow bikini top, black bottoms, and sunglasses on her head, digging into the large package on the beach.

One of the people attempting to take the narcotics was arrested and identified as 61-year old Robert Kelley. Kelley told police he was holding the narcotics in his car until law enforcement arrived. (Yeah, sure.) Police found an 11-pound brick of marijuana wrapped in a beach towel inside the trunk.

It is still not known where the packages of the drug came from, but Flagler deputies have notified several federal agencies about the find, including U.S. Coast Guard, U.S. Customs and Border Patrol and the Homeland Security Investigations, and U.S. Immigration and Customs Enforcement.

Authorities suspect the packages might have washed up due to the floods from Hurricane Florence, possibly from a boat that capsized due to the bad weather, or from an airplane drop where the pickup boat missed the target. There is also suspicion that the product was simply dropped in the wrong place by an airborne delivery crew. Nevertheless, the marijuana has now been turned over to Customs and Border Protection for further investigation.

If you have any information about the mysterious ?weed stealer? or about the narcotics, you are asked to call deputies at 386-313-4911, email a tip to [email protected], or call Crime Stoppers of Northeast Florida at 888-277-TIPS (8477).