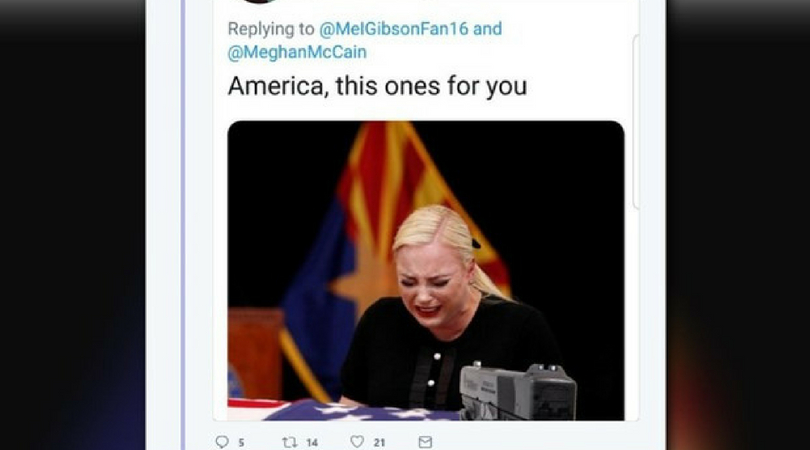 On the same day memorial services took place for the late Senator John McCain in Arizona, a Twitter user posted a doctored image of what appears to be a threat to shoot daughter, Meghan Mccain as she wept over her father’s casket after his battle with brain cancer. That same night, McCain’s husband, Ben Domenech, blasted Twitter CEO Jack Dorsey for allowing the threatening post to stay up.

The photo appears to be a doctored photo taken on August 29, at a private memorial service at the Arizona Capitol. Meghan McCain is seen weeping over the casket, holding Sen. John McCain casket. The image shows a pair of hands holding a semi-automatic handgun, targeted at the woman’s chest. The tweet simply reads, “America, this one’s for you.”

Meghan McCain sobs as she approaches her father's casket as he lies in state at the U.S. Capitol https://t.co/njihQH0od4 pic.twitter.com/Nvvbx2kBsl

Domenech is a publisher of conservative web magazine, The Federalists and stated the tweeted image was online for half a day and had been reported more than 100 times so Twitter administrators must have seen the reports.

Twitter rules include a ban on “specific threats of violence or wishes for serious physical harms” and a”targeted harassment.” It is not the first time the site has been given backlash from users. Users have criticised the site for widespread sexual harassment, threats of violence or rape threats. Four years ago, there was harassment drive at female games on Twitter, morphing into an all-out scandal christened “Gamergate”. Dorsey vowed to address the abuse, promised to go after unwanted sexual advances and tweets glorifying violence and go after hate groups.

I am going to delete the initial tweet now so no one has to see it. Still want an explanation for why something so obviously in violation took so much attention for Twitter to react.

It is still unclear who is behind the @austindelafrog account that posed the image of McCain. Three hours after McCain’s husband tweeted the CEO, the account switched its settings to private. There has been no word of law enforcement taking any further action in regards to the incident.

Editor’s note: This article was originally published on August 31, 2018.

Watch: Candace Cameron Bure Explained How a Conservative Survives on “The View”