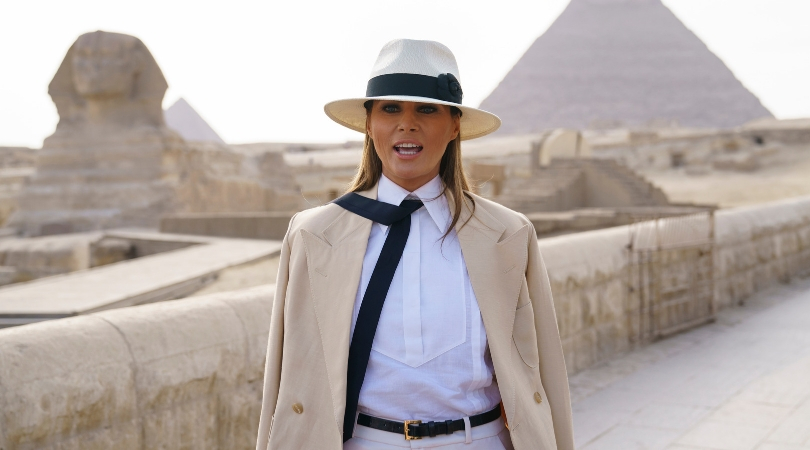 It looks like Melania Trump is taking her husband’s side, after stating victims who make an accusation of sexual misconduct “need to have really hard evidence.” This comes after echoing a statement she made in October 2015, amid allegations against the President of The United States.

Good Morning America released a preview from the ABC News sit down interview in Kenya last week, during Trump’s first solo trip to Africa, where she shared her thoughts on the #MeToo movement and where she stood. Resembling her husband’s opinion, Trump suggested there isn’t enough evidence provided whenever someone accuses another person of any type of misconduct. Trump stated, “If you accuse someone of something, show the evidence.”

WATCH: One-on-one with First Lady @MelaniaTrump. She's opening up for the first time about her life and her time in the White House to @TomLlamasABC.

"Being Melania – The First Lady" airs THIS Friday at 10|9c on @ABC: https://t.co/BFuO7gPBkP pic.twitter.com/MqXC5NuVMn

The First Lady reassured she does support women but echoed her husband adding that men need to be supported too and women who come forward as victims show be prepared to back up their accusations. Trump believes women need to show the evidence first, before making any type of claim to avoid any media assumptions. She states, “You cannot just say to somebody, ‘I was sexually assaulted,’ or, ‘You did that to me,’ because sometimes the media goes too far, and the way they portray some stories it’s, it’s not correct, it’s not right.”

During his 2016 presidential campaign, Donald Trump was accused by at least 13 women of misbehavior ranging from sexual assault to sexual harassment. The allegations came forward after the wake of a 2005 “Access Hollywood” tape released in October 2016, which watch him saying on a hot mic, “And when you’re a star, they let you do it. You can do anything. … Grab them by the p***y. You can do anything.” The White House and press secretary Sarah Huckabee Sanders quickly dismissed the allegations against the President as old news that was brought up and ligated during the campaign.

In response to the allegations at that time, Melania told CNN’s Anderson Cooper in October 2016, that every assault should be taken care of in court, and to accuse, no matter who it is, woman or man, without evidence is unfair and damaging. She continued to say that the accusations were all organized from the opposition, asking if they ever check the background of the women.

This time around, Melania’s comments bore a resemblance to those by President Donald Trump as his Supreme court nominee Brett Kavanaugh was accused of sexual misconduct by three women. As Kavanaugh’s confirmation was being debated, President Trump stated he was worried for the men accused, stating,

“It is a very scary time for young men in America, where you can be guilty of something you may not be guilty of. This is a very, very—this is a very difficult time. What’s happening here has much more to do than even the appointment of a Supreme Court justice.”

During her impromptu briefing with the press, Melania would not say has she believed Kavanaugh’s accuser, Christine Blasey-Ford, but spoke on how every victim should be helped no matter what abuse they had and was against any kind of violence or abuse.