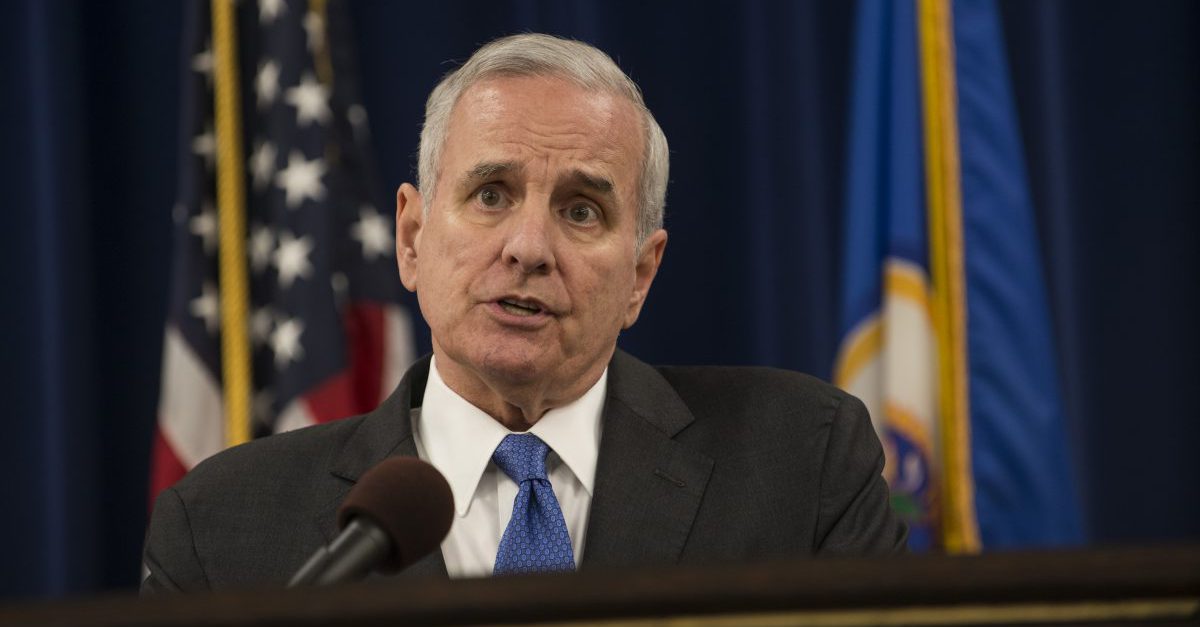 Gov. Mark Dayton collapsed while delivering his State of the State speech on Monday, striking his head on a lectern. The 69-year-old Democrat was helped into a back room and appeared to be conscious, and two colleagues said he appeared to be OK.

House Speaker Kurt Daudt said minutes after the incident that Dayton was “up and about” and that the governor would be all right. Sen. Dan Schoen, who is also a paramedic, was among those who went to Dayton’s aid; he said Dayton was acting normally within 20 minutes of the collapse and poking fun at himself.

The governor’s office said an update on his condition would be released shortly.

Dayton was hospitalized in February 2016 after he fainted at a hot and crowded event. His office said at the time that he had been feeling pressure in his lower back — he had undergone elective back surgery the previous December — before he lost consciousness. Dayton spent just a day in the hospital, and said afterward he had been treated for dehydration.

Dayton has undergone a series of back and hip surgeries in recent years.

The governor fell about three-fourths of the way through his speech as he laid out the opening salvo in a brewing battle with Republican legislative majorities over where to bring the state after November’s elections.

Dayton appeared to stumble as he first entered the House chamber, but joked it away, saying he should have attended the walkthrough. But he appeared to lose his place in his remarks roughly 40 minutes into his speech, began to tremble and then fell forward.

The Democratic governor had already sketched out some of his agenda ahead of his annual State of the State address, calling for more than $300 million in tax relief that’s heavy on credits for low-income families and farmers and urging lawmakers to approve more than $1 billion in a public construction backlog — the Legislature never passed a major infrastructure package last year. Both measures were likely to get top billing in Dayton’s speech as lawmakers dive in to assemble a new, two-year budget with a projected $1.4 billion budget surplus in hand.

But as Dayton enters his final two years in public office pitted against all-out Republican control of the Legislature — the Senate GOP took back that chamber in November, joining a strengthened GOP majority in the House — he’s increasingly looking backward to cement his legacy.

Dayton entered office in 2011 tasked with solving a $6 billion budget deficit. After a stalemate with Republican majorities led to a 20-day government shutdown that year, he and Democrats united to control the Capitol in 2013. They raised taxes on the state’s wealthiest earners, increased the minimum wage and legalized same-sex marriage.

The state has posted several years of surpluses, and the governor has pointed to that financial stability as a hallmark of his six years in office, insisting he’ll safeguard against a return to painful budget shortfalls.

Republicans will no doubt push Dayton for more in tax cuts. Their budget work won’t start in earnest until late February, after budget officials give a final readout of the state’s economy.

RELATED: The northern lights appeared over Minnesota and created a spectacular natural show

But GOP lawmakers were also awaiting Dayton’s promised plans Monday for restructuring a fragile individual health insurance market this year. Republicans have sought those broader health care law changes while considering how to offset massive premium hikes for an estimated 125,000 shoppers who don’t get federal subsidies. Dayton has said those major reforms should wait until after they’ve helped address the sticker shock.

At least in venue, Dayton’s speech returned to normal. After moving offsite for last year’s State of the State amid ongoing renovations at the Capitol, he and all 201 lawmakers gathered on the House floor.