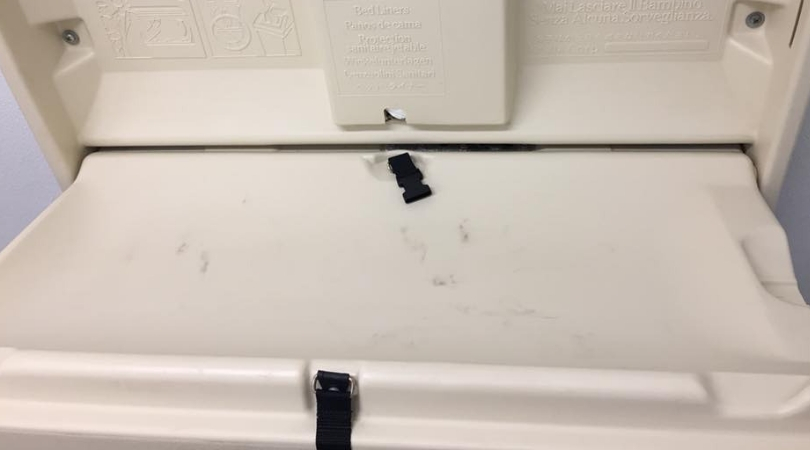 A mother in Indiana is hoping to catch the attention of parents, with a message about the importance of cleaning infant change stations in public areas and rest stops. Jessica Wayman posted on her Facebook page a picture of a changing table, where one can see black marks on it. According to the 24-year-old Indiana mother, these marks aren?t just from dirt, rather spoons.

The mother says the marks are made from burnt spoons that drug addicts use while they shoot up. The marks could be residue from meth or heroin and other harmful bodily fluids such as Fentanyl. How does the mother know? Wayman shared one of the reasons that she decided to warn parents — it is because she experienced it firsthand. The mother is a former addict and said it was common for burn marks to appear in changing areas nationwide. The residue from the spoons can seriously injure a child and unsuspecting parents.

Wayman?s post has been shared more than 115,000 times with many parents commenting they had no idea of the marks, assuming they were left from overuse. In 2016, CDC stated there were 63,632 drug overdose deaths in the United States with fentanyl encoding increasingly on the rise. Fentanyl is a synthetic opioid pain relief that is between 50 and 100 times more potent than morphine. Experts stated the drugs are being sold through illegal drug markets for its heroin-like effect, mixed with cocaine and heroin. Simply coming into contact with the traces of substance could prove life-threatening.

The mother also warned parents that along with people using them as tables while they shoot up, they are also often used by addicts to crush and break up drugs before ingesting. The mother warned, “Before putting your babies anywhere near these things, ALWAYS wipe them down first. Even if you are in a hurry, even if you have a blanket to lay down.”