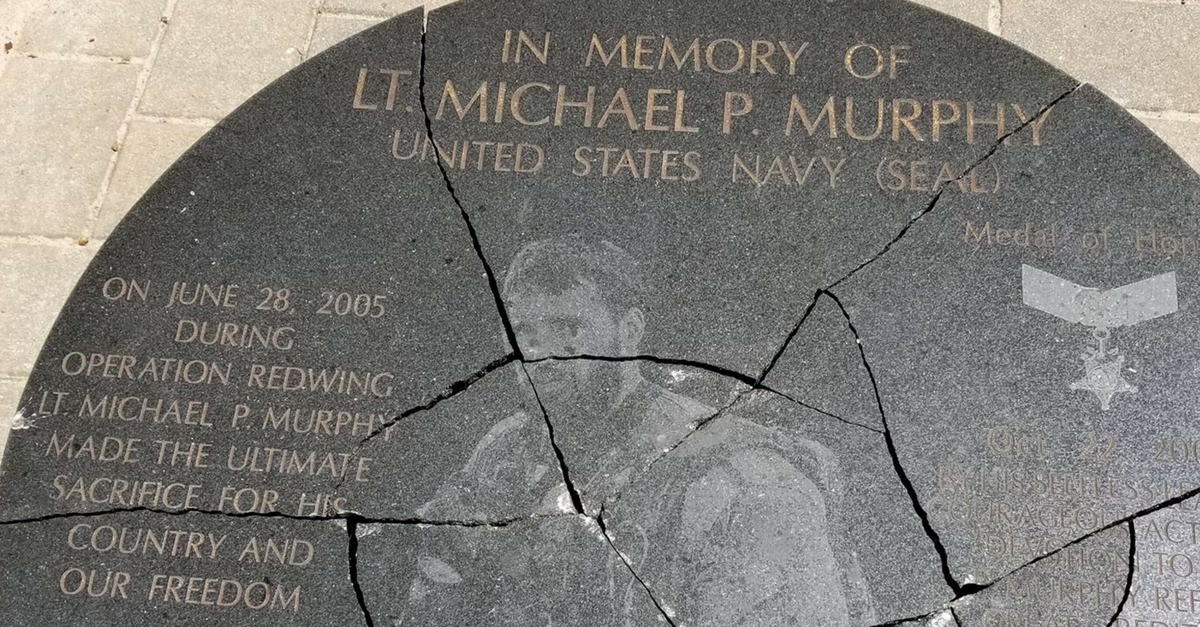 An extremely lame person or group of lame persons decided to destroy a memorial dedicated to Navy SEAL and Congressional Medal of Honor winner Lt. Michael P. Murphy, who was killed in combat in Afghanistan in 2005. Now both the Suffolk County Police and fellow Navy SEAL Marcus Lutrell are offering rewards for any information that leads to the arrest of the vandal or vandals.

Only a coward would do this. We are matching Crime Stoppers Reward to anyone who turns in the low life who did this. To donate towards repairs go to MurphFoundation.org.

Murphy, a native of Patchogue, New York, was killed in Afghanistan in 2005 during Operation Red Wings. The events were portrayed in the film Lone Survivor. Murphy was played in the film by actor Taylor Kitsch.

It’s unclear what the motive was here. Some good, old-fashioned dumb and aggresively useless rage against America or “The Man”? Teenage shitbaggery? Extreme drunkeness? All three?

Sorry to break it to the vandals, but it doesn’t really come off as smart to, say, show your hatred of Donald Trump, for example, by destroying a memorial dedicated to a man who died 11 years before Trump was elected. That’s like taking a leak on the Tomb of the Unknown Soldier because you’re mad about Brett Kavanaugh getting nominated to the Supreme Court. Uh, yeah, sure, I guess that sort of symbolizes the government but these two things are not really related otherwise. And also what you just did was, again, useless. Counterproductive, even!

It’s not often you see a form of protest and think to yourself, “Spraypainting ‘Government Sux’ on a highway overpass would have been more constructive,” but here we are.

Of course, it’s not certain this was a dumb protest. It could have just been kids breaking stuff for the hell of it. Which, again, not a great idea, guys! They’re going to find you for this. You could have broken some potted plants and maybe tossed patio furniture into a pond (but also don’t do that) and the cops probably would have just gone through the motions. But no, you had to defile a shrine to an American hero. They’re not going to drop that one.

The Lt. Michael P. Murphy scholarship foundation, which was founded by Lt. Murphy’s parents, is collecting donations in order to repair the monument.