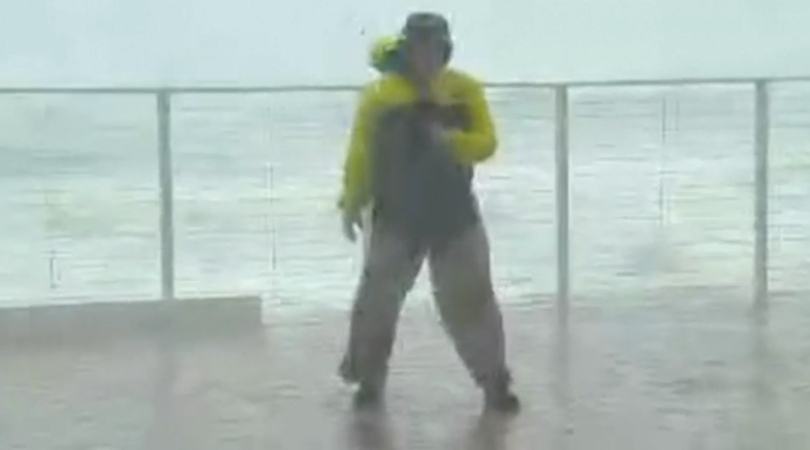 You know the storm is going to be pretty bad when weatherman Jim Cantore shows up. While some get nervous by his presence, NBC News reporter Kerry Sanders was happy Cantore was there. During his live coverage at Panama City Beach for Hurricane Michael, Sanders was nearly knocked off his feet by the storm, before Cantore stepped in to help.

By that time, Hurricane Michael had been moved to a Category 4 storm, sustaining maximum winds of 155 miles per hour, with strong wind gusts. In the video, one can see Sanders beginning to lose his balance, barely being able to stand on his feet, threatened by the wind. Cantore is then seen slowly walking over to help Sanders, trying to hold him up and guiding him to a pillar.

Wow. NBC reporter Kerry Sanders was nearly knocked off his feet by #HurricaneMichael when The Weather Channel's @JimCantore came in to help. pic.twitter.com/QIhlPqBosK

Sanders thanked his “longtime friend” who rescued him during the live report, reassuring his followers he was safe. He shared photos of himself and Cantore with a battered helmet, saying it helped him prevent a concussion. Sanders wrote, “Thank you my friend. You’ve taught me again, back-up support always needed.”

Cantore is no stranger to covering inclement weather for television, including tornadoes and hurricanes. The Weather Channel meteorologist always runs into the middle of the eye and isn’t afraid to face the elements.

A batter helmet prevented a concussion. #hurricanemicheal2018 category 4 winds blew me into a concrete pillar. @JimCantore then rescued me from tumbling over. @NBCNews @weatherchannel Thank you my friend. You’ve taught me again, back-up support always needed. pic.twitter.com/WrsNE0n6rt

Despite his years of knowledge and experience of what do during dangerous conditions, he is still vulnerable to danger every time he plants himself out in the middle of a dangerous storm. For instance, during a live feed of the hurricane cover, Cantore came ridiculously close to danger, proving why it’s never a good idea to be outside in the middle of a hurricane.

The video showed Cantore shouting over the wind, looks up and quickly dashing off camera as a chunk of debris appears to fly through the spot where Cantore was standing just moments before.

Hurricane Michael is bringing heavy rain and tropical storm force winds over South and North Carolina. The center of the storm is 35 miles southeast of Charlotte, with sustained winds of 50 mph. It is expected to drop 4 to 7 inches of rain in parts of North and South Carolina, with up to 9 inches in isolated spots in North Carolina and Virginia. The Hurricane has, unfortunately, claimed two lives, left 900,000 without power and has destroyed and flooded several buildings along the Florida panhandle.