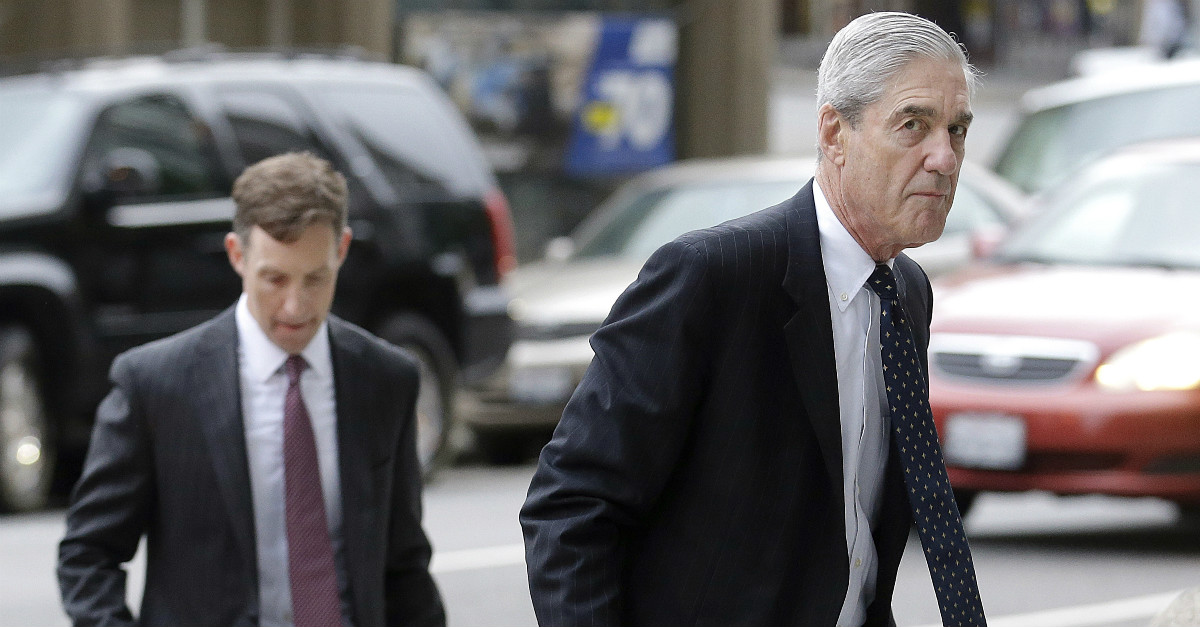 AP Photo/Jeff Chiu, File
FILE - In this April 21, 2016 file photo, attorney and former FBI Director Robert Mueller, right, arrives for a court hearing at the Phillip Burton Federal Building in San Francisco. Mueller has been overseeing settlement talks with Volkswagen, the U.S. government and private lawyers. Mueller is being honored with an award from West Point. The U.S. Military Academy’s Association of Graduates will present the Thayer Award to Mueller on Thursday evening, Oct. 6, 2016. (AP Photo/Jeff Chiu, File)

New text messages between ousted FBI agent Peter Strzok and his alleged mistress and lawyer assigned to the Russia investigation Lisa Page were provided to Congress by the Department of Justice on Tuesday, and they expose their political bias dating back to 2015.

In messages obtained by the media, the pair refer to President Trump as an “utter idiot” and a “loathsome human.”

In March 2016, the secret couple discussed the upcoming election and who they would vote for, with Strzok saying, “I suppose Hillary”  and then moments later, “I would D [Democrat].”

?He doesn?t think you?re an R, does he?? Page asked Strzok. Although, it’s unclear who “he” is.

“He think[s] I wouldn?t vote for her right now. He knows I?m a conservative Dem. But now I wonder,” Strzok replied in a series of messages.

Page and Strzok also exchanged texts in regard to House Speaker Paul Ryan. In them, Page expressed hope that he “fails and crashes in a blaze of glory.” Meanwhile, Strzok responded saying the GOP “needs to pull their head out of that *ss. Shows no sign of occurring any time soon.”

The text messages were released to the House and Senate Judiciary Committees on Tuesday night after multiple requests of lawmakers. Strzok was dismissed from Special Counsel Robert Mueller’s team earlier this month after being suspected of sending politically charged texts that appeared to mock President Trump. As the then-deputy head of counterintelligence at the FBI, he was also responsible for softening the language in James Comey’s announcement that the agency would not recommend charges for then-presidential candidate Hillary Clinton for her use of a private email and server as secretary of state during the Obama administration.

Strzok now works in the FBI’s human resources department, while Page had completed her work at the special counsel’s office prior to anyone’s becoming aware of the allegations. The pair and their ties to the Russia investigation have drawn ire from some Republicans already skeptical of the probe into alleged Russian meddling in the election.

President Trump responded to the initial news about the texts by saying the FBI is in “Tatters ? worst in History” on Twitter.