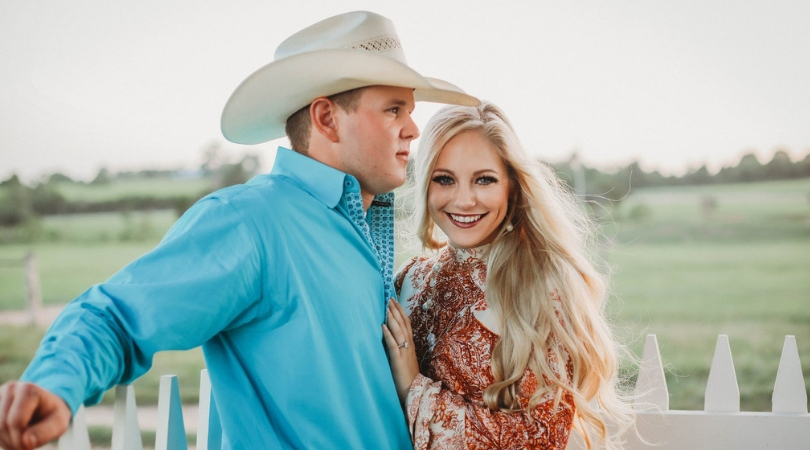 What was supposed to be a beautiful day for a Texas newlywed couple, turned out to be a tragic day full of sorrow. Two hours after saying their vows, the couple was on route to their honeymoon 10 miles east in San Antonio, when their helicopter crashed in a mountain.

The Bell 206B helicopter traveling from Uvalde County went down early morning on November 4, 2018, on the Byler family ranch. Inside the helicopter was the pilot, identified as 76-year-old Gerald Douglas Lawrence and newlyweds Will Byler and Bailee Ackerman. Unfortunately, none of them survived the crash.

TRAGEDY: Authorities are investigating a deadly helicopter crash at a ranch in Uvalde, Texas, that killed newlyweds Will Byler and Bailee Acherman, seen here boarding the chopper as wedding guests cheered their departure; the pilot was also killed. https://t.co/LCDsF7X7cg pic.twitter.com/cBbGqOLh5Y

The 23-year-olds were captured through video taken by friends as they were leaving on the helicopter, following their wedding reception. Their tragic death was first announced by the Houstonian, the independent student newspaper of Sam Houston State University, where they were both seniors.

“These two individuals made a huge impact, and will always be remembered by their kind hearts and uplifting spirits. Will and Bailee spent their last moments on Earth surrounded by family and friends in what can easily be said as the best moments of their life.”

The National Transportation Safety Board is currently investigating the cause of the tragedy. At the time of the incident, The San Antonio Fire Department deployed ten units on scene to aid the investigation. Air safety investigator with NTSB, Craig Hatch, described the pilot as “very experienced”, with 24,000 hours of flying. The team is still working to recover the helicopter because of its “precarious position” on the side of a hill, but estimate the couple was in the air for 5 to 10 minutes before the crash.

After learning about the incident, friend an family of the couple immediately went out to look for the helicopter, that left a trail of wreckage nearly 100 yards long. Authorities first reviewed the notice of a crash on Saturday night but were unable to find the crash site in the dark.

Congratulations to my beautiful friend @baileeackerman. I’m so thankful you picked me to sing at your wedding. I loved every moment of it. Thank you so much Bailee! You have given me a lifetime experience for singing in a wedding but not just that. YOURS! you are someone i love so dearly and I’m so appreciated of this. Thank you from the bottom of my heart! Congratulations! Mrs. Byler and i hope you have a wonderful and bless marriage! Love you! #baileegoesbyler #alwaysanackerman #bylerranch

An emergency locator transmitter was spotted at the crash site, but it still unclear whether it had been activated or whether a Mayday was called in before the actual crash. First responders waited for daylight and used ATVs guided by helicopters on the crash site. The helicopter was later found in the unmanageable state with debris all along the side of the mountain.

The helicopter was registered to W.T. Byler Co. Inc., and was manufactured in 2005. Its current certification was issued in 2012 and was due to expire in 2021. Lawrence’s daughter, Devon de Samaniego, stated her father had been a helicopter for nearly 50 years, the last 16 were under the employment of W.T. Byler Co. He father flew helicopters as an army captain Vietnam and the Gulf War and was “vigilant” about keeping his certifications and physicals updated.

Lawrence was close to the Byler family and was personally asked to fly the newlyweds off to their honeymoon. The couple was married on the sprawling Byler family ranch in Uvalde. Their wedding website, housed on the Knot, showed details about were guest could stay along with the couple’s registries. As of today, the site now has a picture of the couple, their names and date and place of the wedding, and condolences from the website.

Last night was magical in every way. Absolutely perfect. Bailee & Will – I hope I find a love as true & wonderful as yours. I have peace in the fact that you left this earth so full of happiness and love. How awesome to spend your honeymoon with Jesus.❤️ so thankful we got to spend these last few days with y’all. our hearts hurt now, but we know this is not forever. see ya soon sweet friends, love carol

Bailee’s maid of honor posed a tribute to the couple on Instagram, accompanying a picture of her and the bride getting ready for the wedding. Several guests also took to social media to post photos of the bride in her beautiful mermaid gown, dancing with her groom and leaving the ceremony to head to their honeymoon destination.

The couple announced their engagement on Facebook on December 29, 2017, with a photo of both of them in a helicopter, where Ackerman is holding up her left hand to show off the rind. The post read, “I am in awe of you, Will Byler, and I hope that everyone gets to experience a love like the one we have. Today is the beginning of forever TOGETHER!”

Today’s the wedding day! Y’all please say a little prayer as we celebrate Bailee and Will’s love! Also pray none of us trip down the aisle! We are blessed.

Our Prayers are with you Ackerman and Byler family, in this tragic time! But let us not mourn; for the celebration of life and love that came before was a testimony to true happiness. Bearkats unite and celebrate the love these two have here and forever more. #shsu #gatewayathuntsville #bearkats #restinheaven #bearkatstrong

A post shared by Gateway Huntsville Apartments (@gatewayshsu) on Nov 5, 2018 at 5:13am PST

There are no words, only infinite love and prayers. 💙