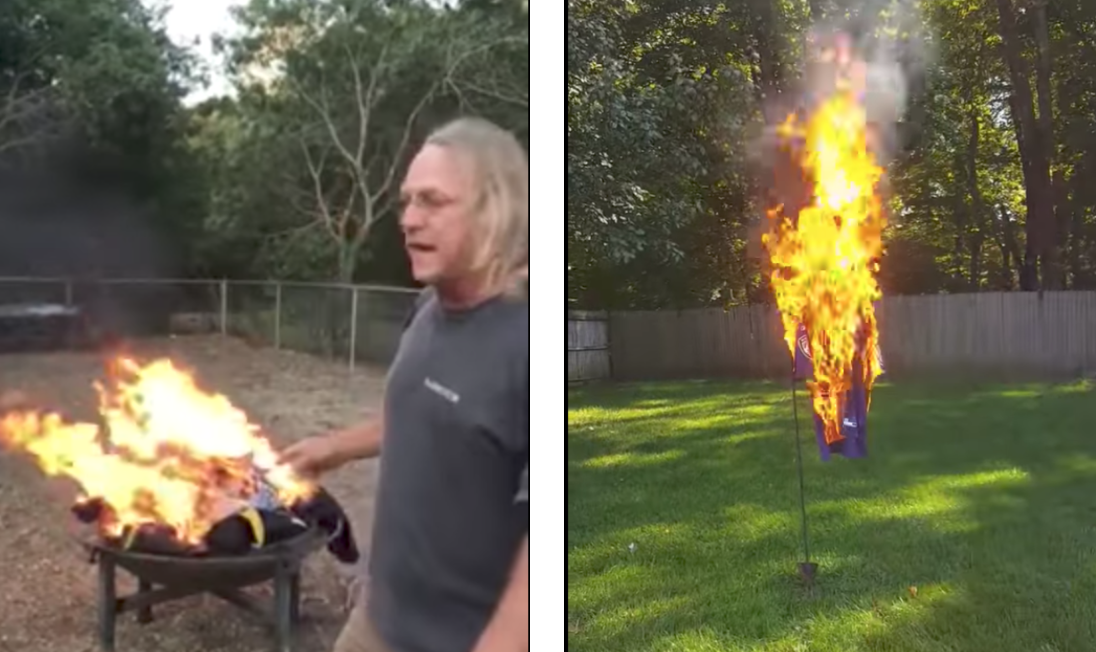 Outraged fans around the country are taking a stand as protests during the national anthem spread across NFL games. Hundreds of players have taken the knee, locked arms, or just stayed in the locker room to call attention to racial inequality in the nation. That’s offended many football fans, who see the act as unpatriotic. Some have continuously threatened to burn their team merchandise if protests continued, and several have kept that promise. The national anthem policy in the NFL prohibits players from kneeling during the singing or playing of “The Star-Spangled Banner” before games. But in 2018, the policy, amended after Colin Kaepernick sparked several protests against racial injustice and police brutality by sitting and then kneeling during the national anthem, hasn’t been enforced. So, safe to say the policy is currently being closely looked again as the NFL begins it’s 2020 season.

YouTuber Dina Harding explained what “people should do” if they want to stand up against their favorite teams. “I challenge all Americans who love this country, who respect our flag, and who respect the National Anthem, to take a stand against the blatant disrespect that is being shown by the NFL and their kneeling players,” Harding wrote on YouTube. “Post a video of burning your Jersey, if you don’t have one, write your team on T-shirt and burn it.”

The man in Harding’s video makes his thoughts on his Baltimore Ravens — and his jersey — very clear. “F*ck all ya’ll,” the man says before he lights his jersey. “I’ve had enough of this bullshit. Kiss my fucking ass.”

Another man, this one in Washington Redskins gear, pontificates to the camera about whether NFL players understand the significance of a folded American flag. The man, posting from the Newly Press Facebook page, says the players don’t respect the lives of servicemen and women who fought for their rights. Another video shows a New York Giants fan, shirtless, clad in a Make America Great Again hat, setting fire to a Giants jersey in a wheelbarrow. The man salutes the jersey as it goes up in flames, before speaking to the camera. “You truly broke my heart,” he says in the video.

No word about whether he was referring to the weather, the players, the ownership, the president, or the jersey itself.

Despite the many likes, comments, shares, and general adoration received by people online, many of the videos have been chastised as a cheap way to get attention. “New best genre of YouTube video is vertical videos of guys ranting then burning their NFL gear to own the Libs,”  Patrick Monaghan wrote on Twitter.
“I never understood participating in jersey burning. Seems a bit theatrical, why not just toss it in the trash? Sell it for cash/donate it?” Twitter user Hunter C. Burress added.

Should we expect more jerseys to burn as the NFL season continues this year?

This article was originally published on September 26, 2017.