Menu
Follow us
Search
Menu
Search
Back dropped by a monument depicting Cuba's revolutionary hero Ernesto "Che" Guevara, U.S. President Barack Obama listens to the U.S. national anthem during a ceremony at the Jose Marti Monument in Havana, Cuba, Monday, March 21, 2016. "It is a great honor to pay tribute to Jose Marti, who gave his life for independence of his homeland. His passion for liberty, freedom, and self-determination lives on in the Cuban people today," Obama wrote in dark ink in the book after he laid a wreath and toured the memorial dedicated to the memory of Jose Marti. (AP Photo/Dennis Rivera) - Puerto Rico OUT

FORT LEE, Virginia — Asked by a service member to weigh in on some NFL players kneeling during the national anthem, President Barack Obama said Wednesday he hoped the controversy would spark Americans to listen to others’ concerns and not just go into separate corners.

Obama’s wide-ranging town hall meeting with members of the nation’s military, taped for CNN, covered an array of hot-button issues. A widow of a veteran who received poor care from the Department of Veterans Affairs wanted to know why there wasn’t more accountability for some employees. A solider wanted to know how the gains he helped secure in Afghanistan would not be lost like some of those in Iraq.

On the topic of the national anthem, Obama said he hopes that those protesting recognize they do so under the blanket of protection provided by the nation’s men and women in uniform. But he also said, “We fight sometimes so that people can do things we disagree with.”

“I want Mr. Kaepernick and others who are on a knee, I want them to listen to the pain that that may cause somebody who, for example, had a spouse or a child who was killed in combat and why it hurts them to see somebody not standing,” Obama said. “But I also want people to think about the pain that he may be expressing about somebody who’s lost a loved one that they think was unfairly shot.”

Obama’s visit came as the White House confirmed that an additional 600 troops would be headed to Iraq. Obama noted that about 15,000 U.S. soldiers are in Iraq and Afghanistan still. He emphasized they are there to provide support and logistics, but not to serve as ground forces seizing territory from the Islamic State group. That job would be done by Iraqi forces, Obama said.

“I am always mindful that anytime our men and women in uniform are in war theater, there is risk,” he said.

On Syria, Obama said there isn’t a week that goes by that he doesn’t review the premises for the actions his administration has taken. He defended the decision not to send large numbers of U.S. troops into that country. He said the U.S. can’t stop a civil war without large numbers of troops, which could lead to overextending the U.S. military and the diverting of attention from other trouble spots like Afghanistan.

“It is in these situations where you have to make judgments about what is best for the national security interest of the United States, even through what you see is heartbreaking,” Obama said.

Donna Coates, the widow of cancer victim Barry Coates, told Obama she believed nothing at the Department of Veterans Affairs has changed since he waited more than a year for a colonoscopy and subsequently died of cancer. He testified about his experience during a hearing on Capitol Hill before dying. She said holding people more accountable was a matter of life and death.

Obama acknowledged “inexcusable problems” in a bureaucracy that became overwhelmed as more troops came home. He said some VA employees have been fired.

“We’re beginning to fix it, but we’re not there yet,” he said.

Obama emphasized that the VA provides 58 million appointments every year. He noted how more resources have been invested in the department, and said it will take a while to see all the improvements that are needed.

“We are resourcing it, but the VA is a big ocean liner,” he said.

Obama was also asked by William Butcher, a retired Army colonel, what advice he would give if his daughters, Malia and Sasha, asked him about joining the military.

“I’d say go for it,” the president replied.

“You remind us we’re one team, we’re one nation, indivisible, with liberty and justice for all,” Obama said. “That’s what you stand for.” 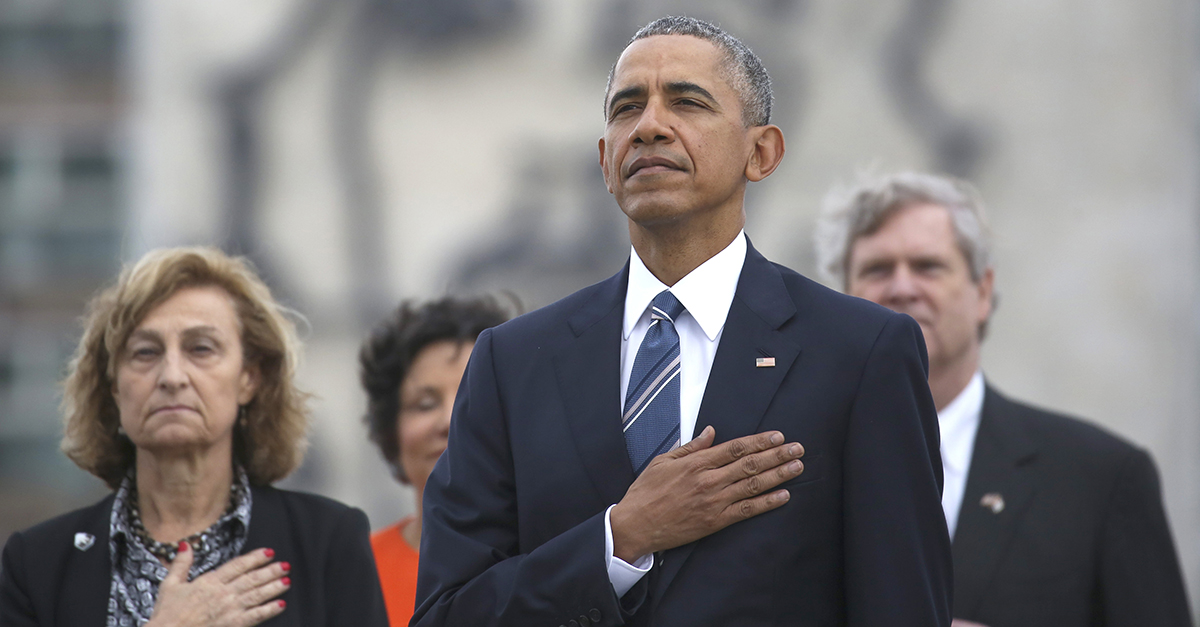