The Connecticut branch of the American Civil Liberties Union (ACLU) is suing the state police after a moment of seriously poor judgement.

According to the ACLU, protester Michael Picard was recording (shown in the video) officers in protest of DUI checkpoints. He deemed them unconstitutional and a waste of taxpayer funds, a conclusion he reached after he conducted his own investigation using public records.

So Michael was out on Sept. 11, 2015, in West Hartford. He shows up, has a big sign that says “cops ahead, remain silent.” It’s handwritten—this is not threatening stuff. He stood on a small triangular traffic island. He was standing there for an hour, hour and a half without any problems. Then, the state police officers who were working the checkpoint come over to Michael, and the first thing they do is slap the camera out of his hand so it hits the ground. He thinks it’s broken.

The officers failed to command Picard to put his camera down before slapping it from his hand. The camera did not break, as Picard and police initially thought. In fact, it went on to record some very damning footage of the officers’ conduct.

The officers searched Picard and found a gun that they knew he carried legally under Connecticut’s open carry laws. This was done “theatrically.” While officers were running a check to see if the gun was legally registered, Picard turned his camera back on.

An officer took it from his hands, placed it on top of the police cruiser, and proceeded to have a conversation with the other two officers present, Barrett continued:

So we get the three troopers at the cruiser talking about what to do. Michael’s permit comes back as valid, they say “oh crap,” and one of the troopers says “we gotta punch a number on this guy,” which means open an investigation in the police database. And he says “we really gotta cover our asses.” And then they have a very long discussion about what to charge Michael with—none of which appear to have any basis in fact. This plays out over eight minutes. They talk about “we could do this, we could do this, we could do this […]”

RELATED: Police in at least four states are collecting DNA from innocent Americans

The officers decided to charge Picard with “reckless use of a highway by a pedestrian” and “creating a public disturbance.” One officer suggested they justify the charges by saying that Picard was waving his gun around in public.

The charges subjected Picard to criminal prosecution. It took the course of a year for both charges to be dismissed separately.

He filed a complaint with the state police, but they were less than cooperative. The state police wanted Picard to appear before them without his lawyer present.

The ACLU has identified three claims against the state police: infringing upon Picard’s right to record them, a Fourth Amendment violation after the unlawful seizure of his camera and the officers’ retaliation against Picard’s First Amendment right to criticize the police’s actions. 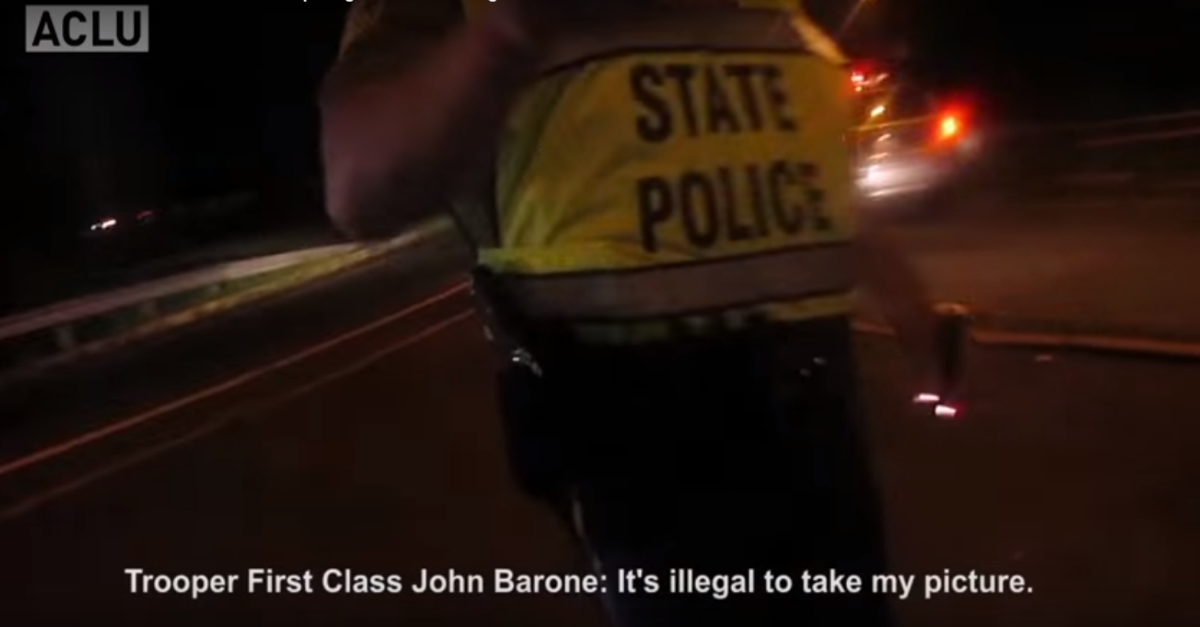