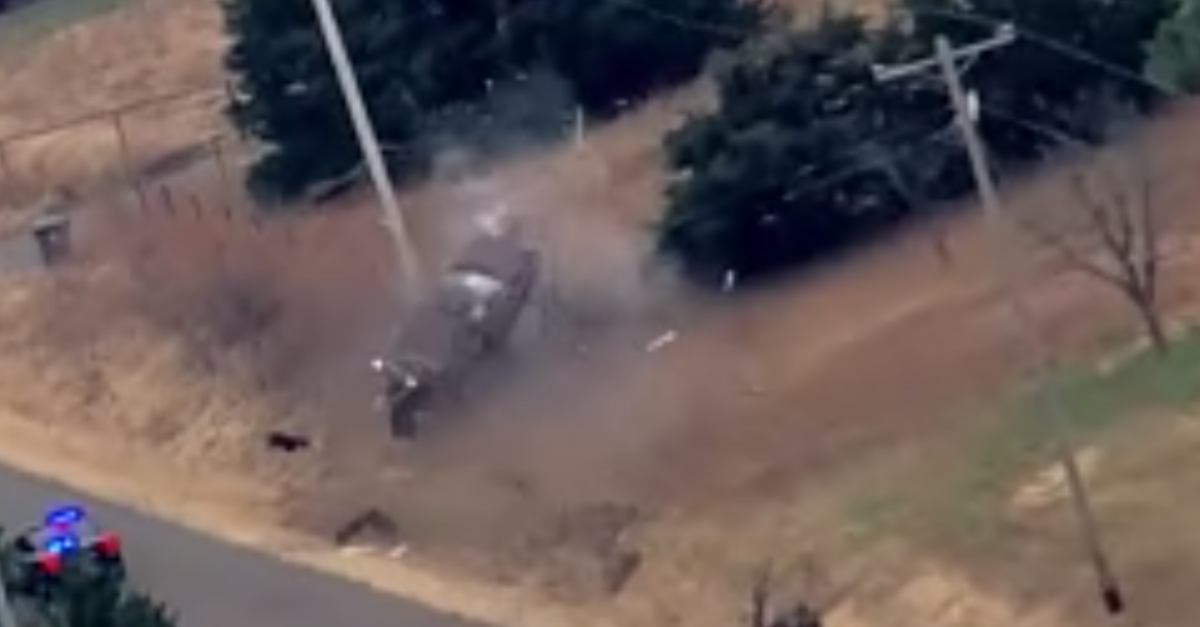 A police chase that began on a Friday morning in Oklahoma City, Oklahoma, ended in thrilling and violent fashion when an Oklahoma Highway Patrol car performed a pit maneuver on the fleeing suspect vehicle and forced the fleeing car off the road. The car, however, was forced sideways into a ditch while still traveling at a high-speed, causing it to flip several times and violently crash sideways into a telephone pole.

According to KOCO News 5, 27-year-old Daydrion Dennis, an Oklahoma woman, led Oklahoma City police on a high-speed chase through parts of Oklahoma City and nearby Moore. Oklahoma Highway Patrol was finally able to end the pursuit near Norman, Oklahoma, after Dennis drove through the University of Oklahoma at a high rate of speed.

The high-speed pursuit, including its ending, was caught on camera by news helicopters.

Not sure how anyone walked away from that but apparently Dennis did, though her maroon sedan for sure did not. That was about as wild of a crash as I’ve ever seen in a police chase. The police officer pursuit and more notably the ending of it was probably definitely not worth the traffic citations Dennis was wanted for in Cleveland County. Or maybe it was the felony warrants. (It was probably the felony warrants.)

Either way, this is why you don’t flee from the police… unless you’re more than 90% sure you can get away. Like if you’re a high school track star running from a fat cop breaking up a kegger, basically. Because there’s no, “Just figuring it out,” especially if you’re driving. What if you hit red lights and stop signs? That’s actually potentially dangerous since traffic stops exist for a reason. Law enforcement is trained and, more importantly, usually excited, to see some action. No chase ends well for you.

Editor’s note: This article was originally published on December 7, 2018.