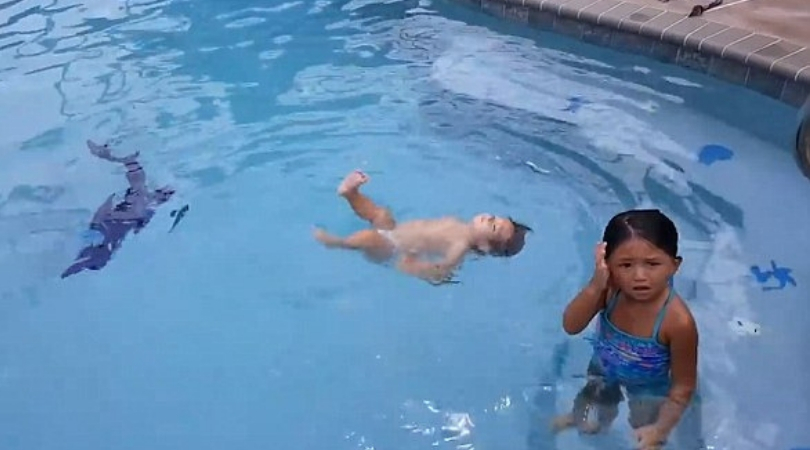 Babies, we all love them. Especially at that young age when they are barely starting to walk or talk, making things even cuter. Well, for today’s daily dose of cuteness, Grace Fanelli from Florida is totally winning mom of the year, after she posted a video of her one-year-old swimming by herself! Yes, baby Kassia was only 16 months old, meaning the 1-year-old couldn?t talk, but she could sure swim! The video shows baby Kassia demonstrating some extraordinary skills, as she strikes out with her little arms and legs.

Kassia then turns around quickly without fear to get some air, and one more time flops around and begins to swim. The toddler was able to climb out of the water and swim from one side of the shallow end to the other. Grace stated she wanted to get her children comfortable with water safety in order for them to gain confidence when it came to swimming. Her eldest daughter who is now three is also shown in the video swimming around. Grace stated she gave her daughter swim lessons when she was only 9 months. Her main motivation for teaching the girls to swim at an early age was to help them save themselves from child drownings until help arrives if an incident ever occurs.

While the concept of a child learning to swim might sound appealing, swim instructors want to remind parents that it may not be the best idea for them to learn at a very young age, due to the dangers behind it. The American Academy of Pediatrics recommends that children begin swimming lessons or go to a swim school at the age of 4, and children ages six and 12 months should learn to hold their breath for drowning prevention in case they fall into the water, giving rescuers additional time. By 19 months, toddlers should learn to stay afloat and propel forward enough to return to the side of the pool.

Of course, one should never force their children to go in the water, but you might want to try a swim class or swim program for them to get comfortable with the idea of pool safety. Clearly, Kassia is ahead of the curve in that department. But, according to the American Academy of Pediatrics, drowning deaths are preventable among toddlers and infants. Statistics show that drowning is the main cause of death among children, occurring in bathtubs and buckets. Toddlers between one and four commonly drown in swimming pool areas, and children older than five are most likely to drown in lakes and river.

What can you do in a drowning emergency? Experts recommend,

Editor’s note: This article was originally published on September 13, 2018.

Watch: These Capri Sun Swimsuits Are All You Need This Summer!