Thanks to a number of different factors (social media, bad journalism, echo chambers, boredom, being dumb) many Americans, regardless of their beliefs, have convinced themselves that the world is on fire despite overwhelming evidence to the contrary (primarily the notable lack of things on fire).

This tends to make them… testy. Anxious. Emotional. A little short-sighted. (And that’s being generous.)

That probably goes a long way to explain why Palo Alto, California resident and World’s Worst Nazi Hunter Rebecca Parker Mankey was more or less literally hallucinating Nazis and reacted accordingly — with panicked, non-sensical screaming and wild mental (along with physical, probably) flailing. And hey, to be fair, if you hallucinated a Nazi you’d freak out too. That’s a wild thing to see. It makes for a bad trip. Especially if you have no idea that you’re tripping. If you walked into a Starbucks to grab an iced coffee and you suddenly spotted what you were sure was actual Hitler in the corner putting together his outline for “Mein Kampf” you’d react.

The problem is that Mankey didn’t see Hitler, even if she thought she did. What she saw was an elderly Donald Trump supporter in a Make America Great Again hat. Minding his own business. She did not react accordingly.

Mankey walked over to the man, asked him about his hat, and then turned to the restaurant and announced to the other customers that the man was a Nazi who “hates brown people”. (The man, who only identified himself as Victor, is Jewish and was wearing a yarmulke under his hat, by the way.) Mankey also invited the other customers to join in her intimidation, saying, “Come over here. Let’s get this guy.”

Much to Mankey’s dismay, however, the other Starbucks customers were not eager to get up and scream incoherently at a random man drinking coffee. At one point Mankey even wondered aloud, “Why am I the only one yelling at this guy?”

Disappointed that she wasn’t able to rally a mob to attack an old Jewish man because apparently she was the only decent person in that Starbucks, Mankey proceeded to do what anyone out to make the world a better place would do. She got on Facebook and tried to recruit her local friends to harass the man, get him fired from his job, and make him feel unsafe in his own home. She also managed to sneak in a few brags about how funny, brave, and admirable she is. Say what you want about the woman but she knows how to social media. 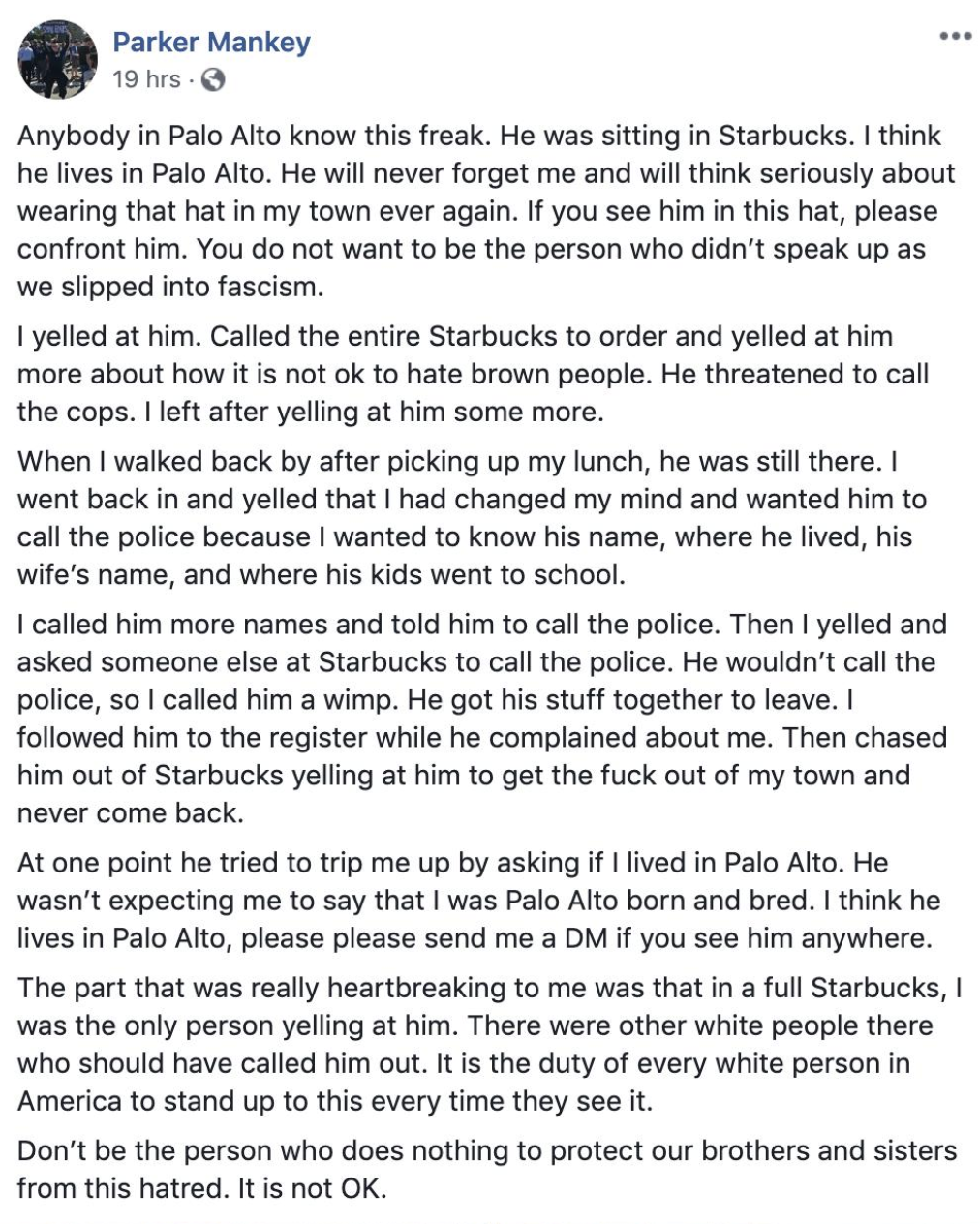 The best part about this brag is that the typos let you know she wrote it quickly, out of excitement. 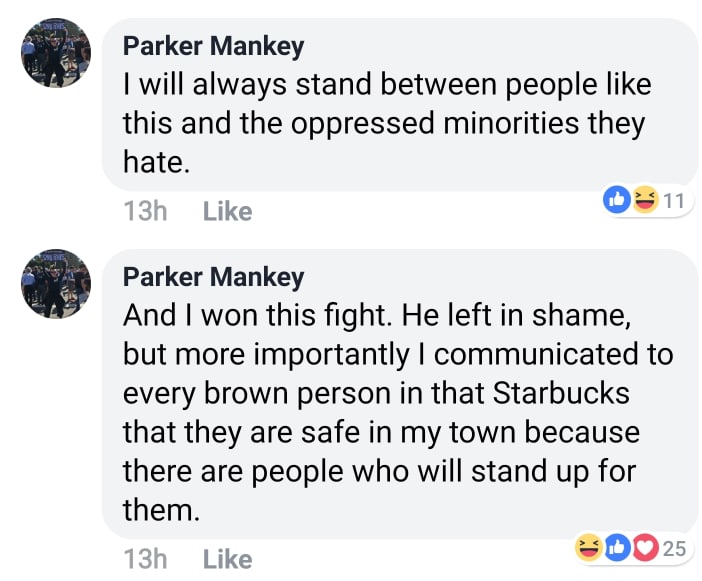 She’s the white savior minorities deserve, and also the one they need right now. 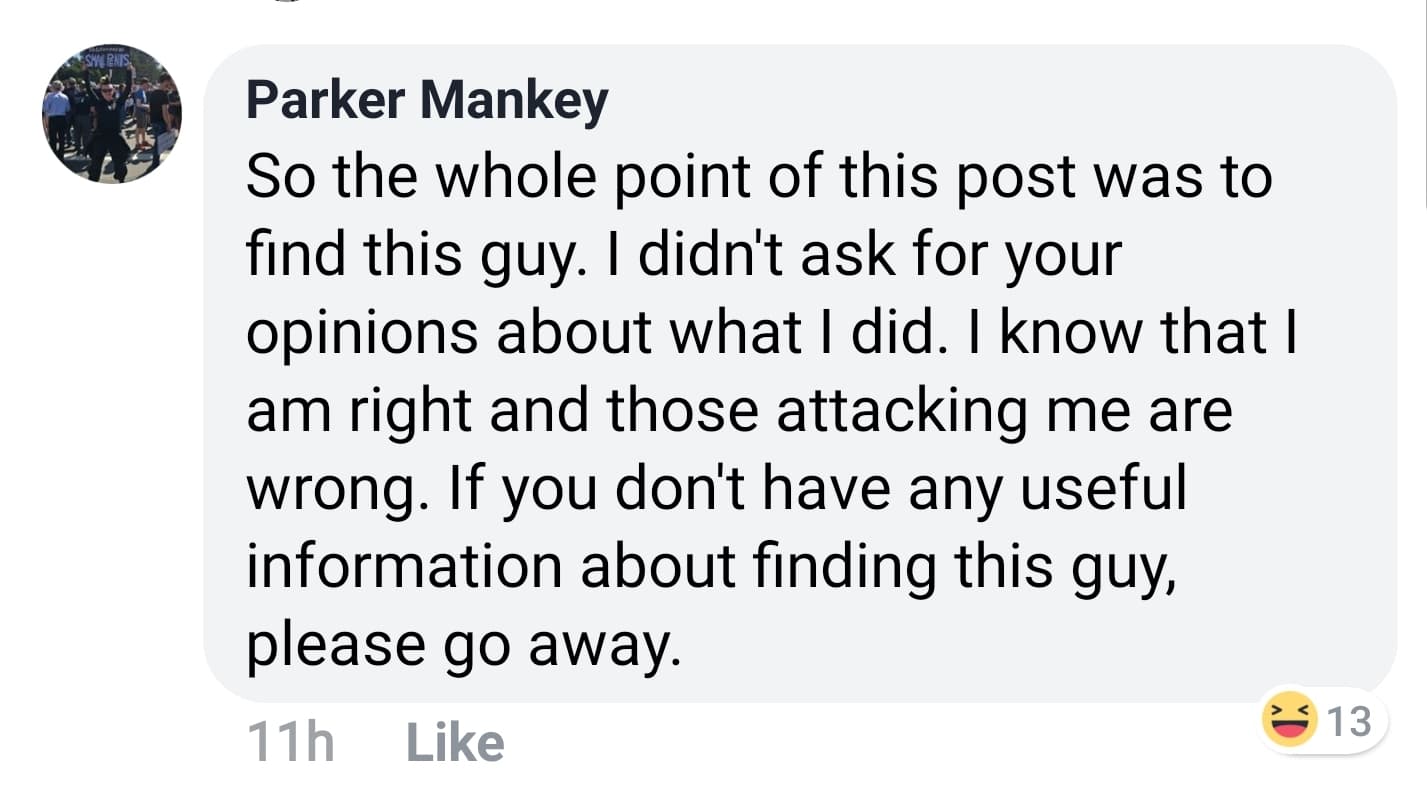 Because the internet is actually the only real threat to society, everything Mankey wrote was immediately saved by people angry at her harassment campaign and was then used in turn to harass her.

Shortly after all this went down Mankey, who worked as an accountant at a music store near the Starbucks, was fired from her job because the store had what she presumably believes to be an outrageous policy about not organizing social lynch mobs. (In her defense, no one ever reads their HR handbooks.) The store’s owner said Mankey’s actions left him dumbfounded and confused, and that they were not in line with the store’s mission or culture.

Victor said he didn’t want Mankey to lose his job, but that he also doesn’t want Mankey’s brand of political activism (read: throwing pee pants tantrums) to be encouraged.

In case you’re wondering who the ultimate winner was here, the only definitive answer is, “Not America.”

Editors Note: This article was originally published on April 4, 2019. 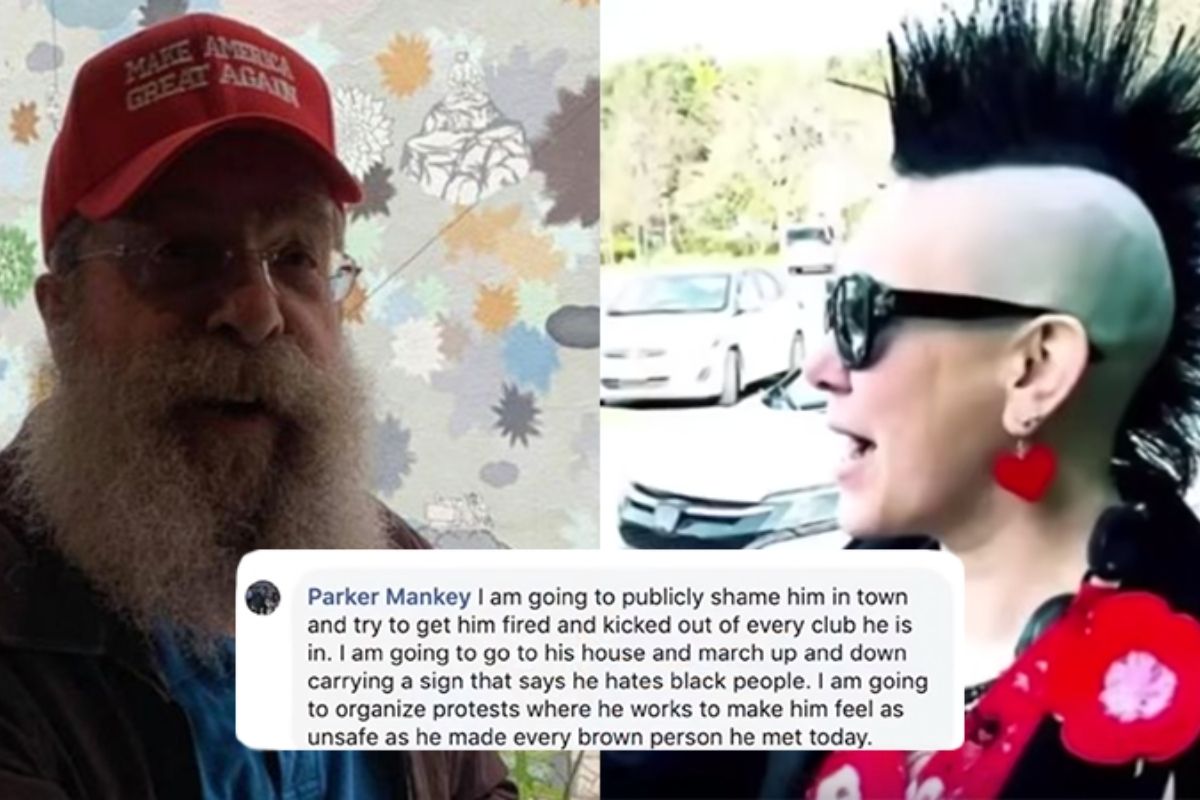