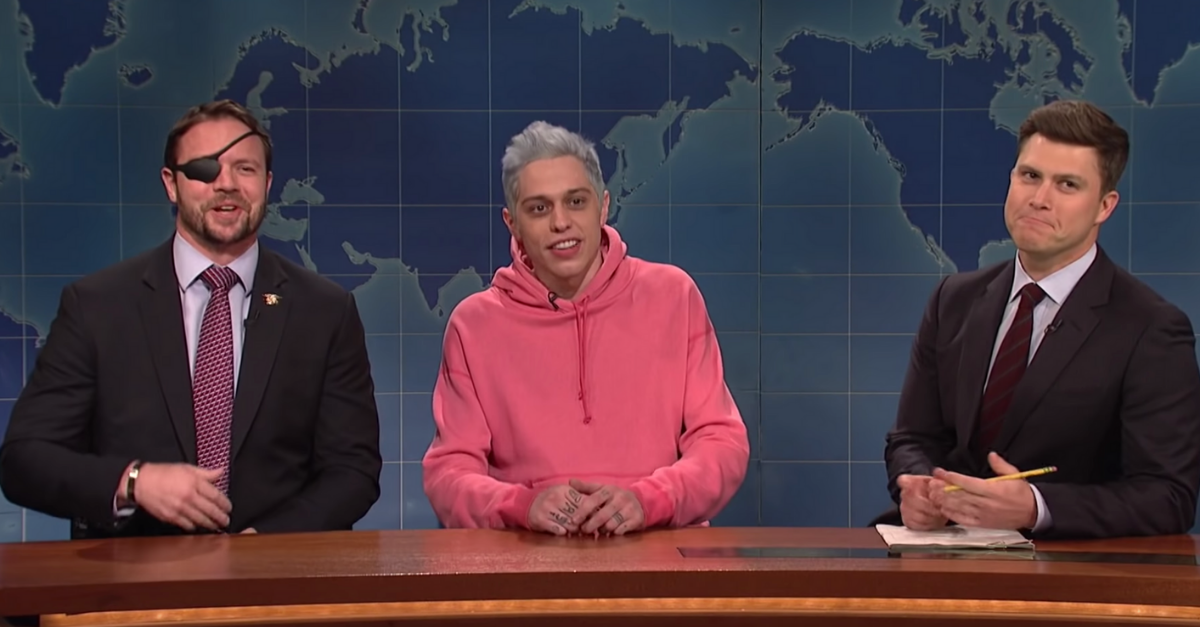 Last week, then-candidate for the Texas 2nd Congressional District and former Navy SEAL Lt. Commander Dan Crenshaw found himself the butt of a joke about his eye patch. During a Weekend Update segment, Saturday Night Live‘s Pete Davidson mocked the appearances of various Republican and Democratic candidates in the 2018 midterm elections. Crenshaw was one of them. As is tradition, a week’s worth of controversy and outrage ensued. This time, though, it was pretty warranted.

Davidson, who was offering up his imaginative (and, generally, hilarious) ideas about the types of people he thought the candidates were based solely on their looks observed, for example, that New York representative Peter King looked like, “if a cigar came to life.” (This is unsettlingly accurate, by the way.) Davidson, who looks like he took up smoking at the age of 10, was even self-aware enough to end the segment by roasting his own appearance. You can watch the entire segment below.

The part immediately after the porno line, where Davidson, about as ignorantly as possible, dismisses the fact that Crenshaw wears the eyepatch because of an injury he suffered from an IED explosion while fighting in Afghanistan, is just bad. It’s ill-advised and terribly delivered. From the moment I watched this segment on YouTube the Sunday morning after it aired — before I read anything about the controversy surrounding it — I turned from laughing to cringing in an instant. Davidson had a good joke and absolutely blew the landing with his thoughtless dismissal of how Crenshaw was injured. It was bad comedically and even worse optically.

It’d be one thing if Davidson made the “hitman in a porno” joke and then acknowledged that it was probably wrong of him to mock Crenshaw’s appearance considering how he came to look like that. A followup consisting of an acknowledgment that Davidson was, by his own admission a week later, “being a dick,” would have effectively landed the joke. Would people still have been pissed? Yeah. But oh well. It’s 2018. People are always going to be pissed at something someone does. If money from the Koch brothers or George Soros straight up cured cancer fifty percent of the country would still find a way to not be cool with it.

You can joke about anything if you do it right. Davidson didn’t do this right.

In defense of Davidson, his offhand comment after the actual written joke was thoughtlessly dismissive of Crenshaw’s monumental sacrifice because it was, probably literally, made without thought. It was in the moment. It’s probably (hopefully?) doubtful Davidson would sit down, think about it, and then write that. And it is on brand for Davidson, who is always loose and dismissive, but usually of himself. He is an extremely self-deprecating comedian who generally dismisses the importance of everything. He did what he always does, except that doesn’t play in a joke like this. A joke like this requires extra care. It’s a far tighter rope to walk. (But it can be walked.)

Davidson also lost his dad Scott Davidson, who was a New York City firefighter, during the 9/11 attacks. It wouldn’t surprise me if he felt like he has more latitude to make jokes about these sorts of subjects. Human tragedy, and the like. Mostly, that does give him more room to operate, I think.

So on this week’s Saturday Night Live, after six days of taking a beating from both conservatives and liberals on every platform imaginable, Davidson came back on Weekend Update to give a heartfelt but still funny monologue apologizing to Crenshaw. Then, now Congressman Crenshaw came out to accept it and rip on Davidson a little, about both Davidson’s looks and his recent breakup with half-angel/half-human pop star Ariana Grande. Afterward, Crenshaw gave his own sincere message to the American people about forgiveness, honoring veterans, and focusing on what unites us as Americans. He called Davidson’s dad a hero as well.

All good. All great. Davidson leaning in as the camera pans out and telling Crenshaw, “You’re a good man” is exactly the sort of thing this country needs more of, as well as the ability to make fun of each other without then wanting to murder each other and somehow feeling justified in that. I don’t care how sappy that sounds. I know how sappy that sounds. It’s still true.