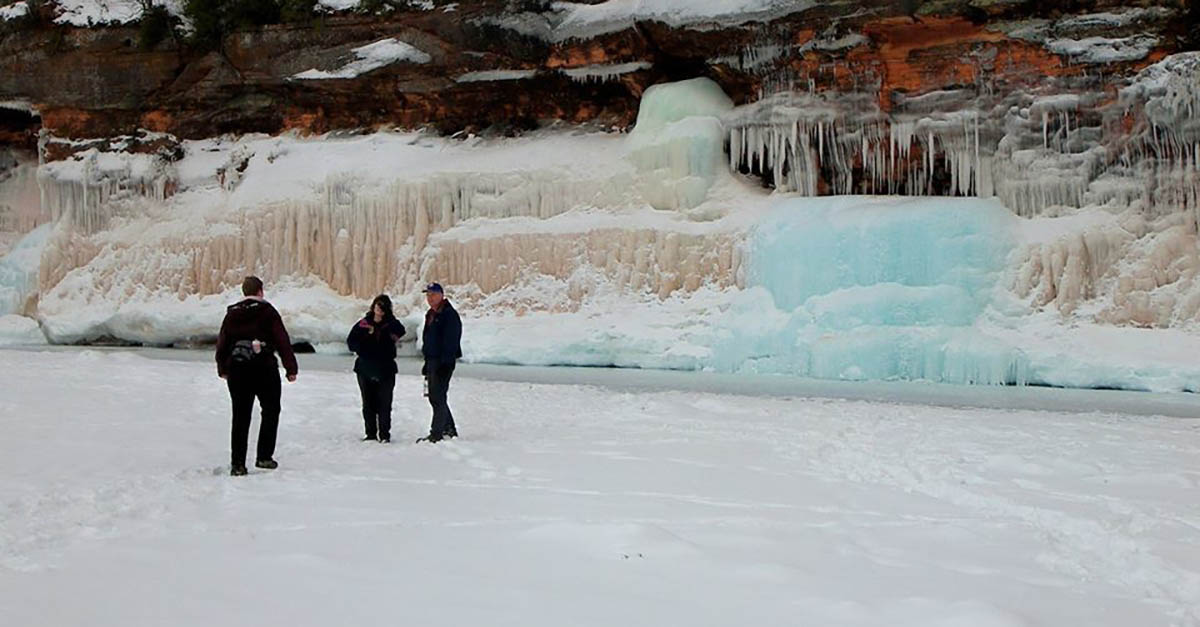 An amazing phenomenon is drawing photographers to a Michigan bridge, and the pictures they’re taking are completely stunning.

Photographers have taken full advantage of the blue ice near Mackinac Bridge, which experts say is all thanks to science. The winter weather phenomenon can be seen at all kinds of angles.

According to Michigan Live, the ice does not turn blue every year. But when it does, staff at the Apostle Islands National Lakeshore in Lake Superior have explained that ice “only appears blue when it is sufficiently consolidated so that air bubbles do not interfere with the passage of light”:

Without the scattering effect of bubbles, light can penetrate ice undisturbed. In ice, the absorption of light at the red end of the spectrum is six times greater than at the blue end. Six feet into the ice, most of the light in the red spectrum can?t be seen. A lack of reflected red wavelengths produces the color blue in the human eye

Photographers like Tori Burley, of Mackinaw City, have waited patiently for the ice to turn blue. In fact, Burley said she’s waited seven years as the the last time she saw blue ice as beautiful as this was in 2011.

“I?ve been waiting oh so patiently ever since then.”

The freelance photographer explained that pictures don’t do the scene justice.

“It?s way prettier up close,” she said. “When you?re standing there, it?s just towering right next to you.”

The blue color appears when the ice is very dense, and forms with little or no air bubbles inside.

More of Burley’s stunning pictures can be viewed on her website.

Photographer Jennifer Cole, who grew up in Mackinaw City, said that she shares her father’s passion for pictures and loves “the beauty of northern Michigan.”

She too was inspired to take pictures of the blue ice.

The blue ice has attracted the eye of many photographers, including Dustin Dilworth. Dilworth captured a stunning video of the blue ice that even shows an eagle protecting its territory.

😍 Check out these beautiful blue ice stacks on the Straits of Mackinac, near the Mackinac Bridge! @PureMichigan

This morning on the Straits of Mackinac: eagle defends his 25ft ice mountain from a pesky crow. He did not budge from his perch. #puremichigan #wildlife #eagle #merica pic.twitter.com/OUGKGMFWlH

RELATED: This viral video of a teen shattering an icy trampoline looks like something out of a movie