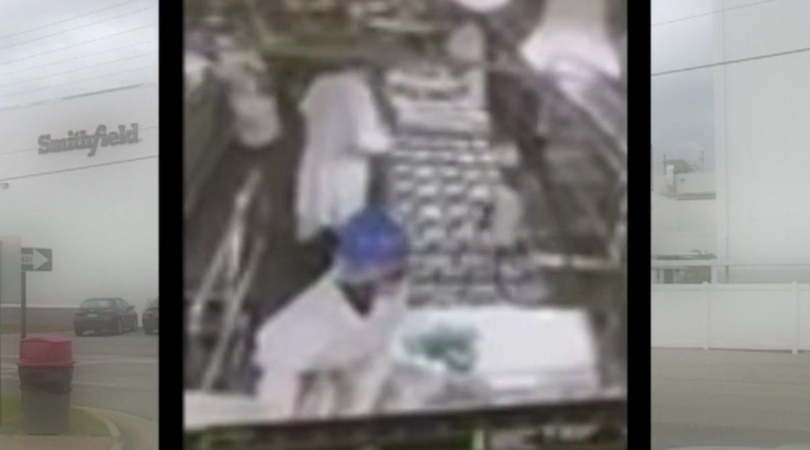 A Smithfield Foods employee in Virginia is being accused of urinating on the production line while handling products. According to authorities, the incident occurred at the packing plant in Smithfield, and the whole incident was captured on surveillance video. The employee is seen packaging products, taking his gloves off, lean up against the counter, unzip his pants and pee on the production line. His co-workers, who are a few steps behind, don’t seem to notice what the man is doing.

The employee proceeds to put his gloves back on and continues to work. According to Smithfield Foods, more than 50,000 pounds of product was disposed, following an internal investigation that showed the employee had indeed urinated at his station. The facility immediately halted production and fully clean the processing line, and sanitized all the equipment multiple times before resuming.

As for the employee, his identity remains anonymous, but he has been suspended pending the outcome of a complete investigation. Smithfield Foods is a $15 billion operating a number of meat processing plants around the country, including, Tar Heel (the world’s largest pork processing plant) in North Carolina, Nathan?s Famous, and Eckrich.

Smithfield Foods has it’s headquarters in Smithfield Virginia with more than 2,500 employees, along with a meat-packing plant that produces bacon, sausage, pork, and smoked meats and has a separate plant for dog food. The company released a statement reading, “The facility and its employees’ immediate response and corrective actions to this isolated incident reflect the company’s commitment to ensuring the safety and quality of its products.” They did not specify as to which products were specifically affected, and which ones were disposed of.