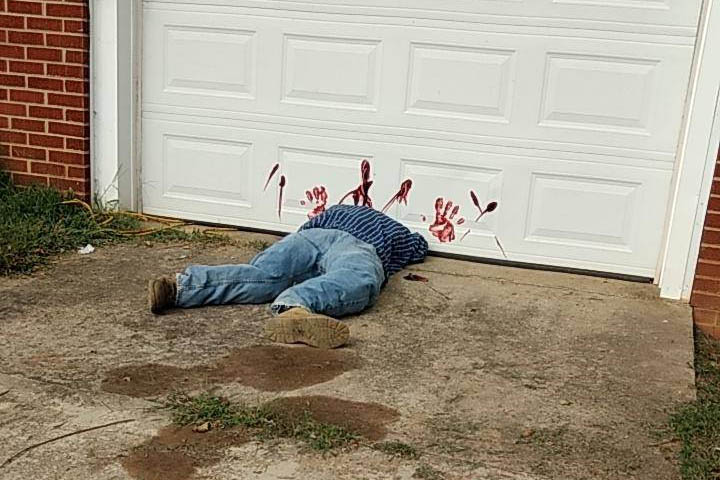 Sheriff’s deputies in Tennessee on Wednesday posted a friendly warning to county residents that, as Halloween approaches, not everything in their community is as it seems.

A Halloween Display Has Neighbors Freaking

Officials with the Greene County Sheriff’s Department posted a photo to the department’s Facebook page that shows a dummy dressed in men’s clothing lying on a driveway, positioned so it looks like the man’s head was chopped off by the home’s garage door. Red splatters and bloody-looking handprints mark the door above the dummy.

“Attention, everyone! For those of you driving on Chuckey Pike in Green County: THIS IS A HALLOWEEN DECORATION!” the warning reads. “Do NOT call 911 reporting a dead body. Instead, congratulate the homeowner on a great display.”

Many of the department’s followers got a chuckle out of both the display and the warning. (They’re obviously Halloween-lovers.)

“The fact the police department had to make this announcement means more than enough people called,” one man wrote.

Department officials responded to the man’s comment, as well as others’ questions on social media asking if someone really did call 911.

“The call was given out as a ‘suspicious person lying in a driveway with bloody handprints on the garage,’” the response read. “Officers responded with lights/sirens until the first officer arrived to see this.”

I thought the halloween decoration of Trump lynching Obama was bad…

what the actual f*ck is wrong with you, @GOP?

Imagine the police officer actually responding to that. You have to mentally prepare yourself to find some lunatic covered in blood, just in case. Maybe someone in the home screaming, “Help me!” as you approach. You start thinking about all the stories your buddies who are cops in Florida have told you over the years. Then you get there and it’s a pile of clothes and ketchup. Definitely a relief, but that’s a rough adrenaline come down.

Another of the department’s followers wrote that she and her family did a similar prank one year using the deck of their home.

“We dressed [a] dummy and had it looking like [it was] falling off the deck,” the woman wrote. “Got lots of response.”

Other commenters did not find the Halloween prank as funny.

“I might be a buzzkill, but I just don’t think this is a good idea,” one woman wrote.

She wrote that pranks like the one pictured could result in someone truly injured being ignored and not getting the proper aid.

“I’m good with pumpkins and such, but I would leave the horror in Hollywood,” the woman wrote.

At least it was a random fake dead body. The last thing you want is some neighbor putting up a Halloween decoration showing Trump beheading Joe Biden or giving Nancy Pelosi COVID, or some other Fox News fever dream. Nor do you want the other end of the spectrum where your neighbors put up Obama being the Freddie Kruger to Trump’s bad dreams or something lame like that. That’s a long way of saying at least it wasn’t political nonsense. Just a good old fashioned gruesome dead body. That’s what Halloween costumes and decorations should be about, after all. Random, dispassionate violence.

This article was updated from its original version, which was published September 21, 2017.