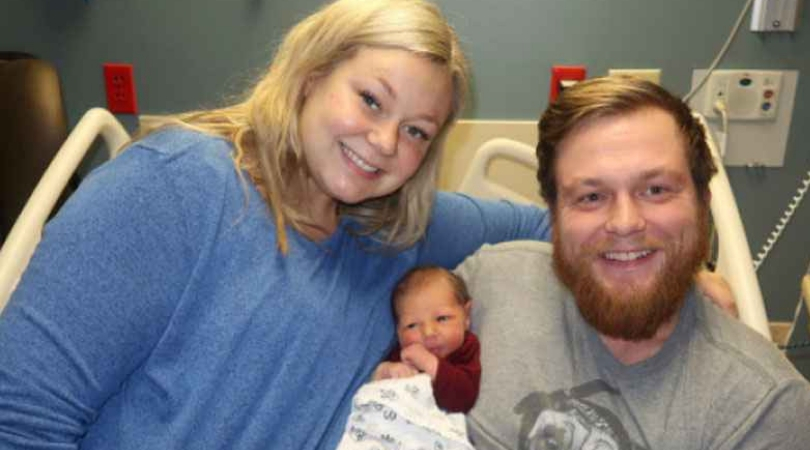 A pregnant woman in Minnesota managed to help her husband cheat death and give life in a day’s work! Ashley Goette, 28, from West Saint Paul, helped save her husband’s life when he suffered a health scare before she was supposed to give birth to their child. Her husband, 28-year-old Andrew Goette, went into cardiac arrest overnight on October 16th.

Ashley, who was 39 weeks pregnant at the time, stated she was woken up by what she thought was Andrew snoring, noticing later he was actually gasping for air. She immediately called 911 and dispatchers coached her through performing CPR until paramedics arrived, taking him to United Hospital in Saint Paul, Minnesota. At the time of the call, Andrew was reportedly not breathing and was “turning blue”.

When arrived at the hospital, pulmonary and critical care physician, Dr. Alex Teeters, said that doctors cooled Andrew’s body immediately. They were initially concerned with Andrew having severe brain damage from not getting enough oxygen to the brain and were “preparing for the worst.” He was put into a medically induced coma to reduce brain damage.

Ashley was terrified after hearing the concern from the doctor, stating, “I didn’t want to have to think for one second about having to do any of this without him. I kept telling him the whole time he was asleep, or in his coma, that I was not going to have this baby until he woke up.” Nurses eventually began to warm Andrew’s body back up and cut back on the medication keeping him in a coma, waking up on October 17.

In a frantic state, Ashley had to deliver the baby via cesarean section, but due to his condition, Andrew was not allowed to be in the room. Ashley said her sister helped set up a Facetime call so her husband could watch Ashley deliver their healthy son, Lennon Andrew.

After a successful birth, Ashley and Lennon were discharged from the hospital but decided to stay with Andrew until he is discharged. Doctors stated at first, they believed Andrew had a heart arrhythmia, later finding he had Wolff-Parkinson White syndrome, a condition that causes a rapid heartbeat.

The family has set up a GoFundMe page where they are asking for donations to help offset medical costs allowing the Goette’s to get back on their feet. You can donate here. I guess moms really are superhero’s, huh?

Editors Note: This article was originally published on October 24, 2020.