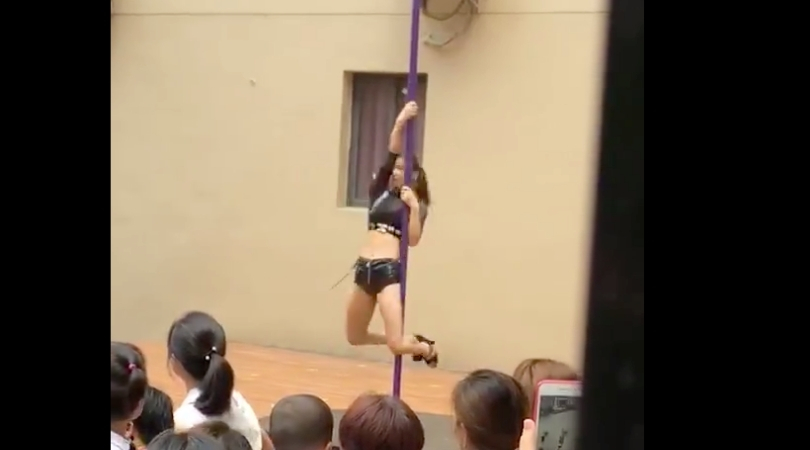 A kindergarten principal in China has been fired after she welcomed students back to school with a pole dancing display. Parents and children at the Xinshahui Kindergarten in Shenzhen were shocked as the pole dancer…I mean, kindergarten principal, performed a routine on the flagpole, located out in the school’s courtyard. Several parents recorded the incident, where one can clearly see the pole, the Chinese flag, and a woman spinning around in the air. The videos are now going viral on social media showing off her “excellent skills”.

Principal Lai Rong stated there had been 500 children aged 3-6-year-old and 100 parents in attendance. The event is part of a ceremony commemorating the start of a new school year in China, which is the first Monday in September. Each year, the school, located in the southern province of Guangdong, holds a special ceremony to welcome the students and their families, and invite alumni or the principal to give motivational speeches.

Who would think this is a good idea? We're trying to pull the kids out of the school and get our tuition back. They wouldn't give us the number of the company that owns the school, but looking into that. pic.twitter.com/vEdIhuq774

Parents called the incident a “horrific viewing experience”, and threatened to take their children out of the school. Several stated this isn’t the first time an ‘inappropriate’ incident occurs throughout the year. Last year, according to Shenzhen-based journalist Michael Standaert, the school had 10 days of military ‘activities’ and displays of machine gun and mortar at the door. The father expressed his concern through his Twitter account, saying the dance was the final straw since he is now planning to take his children out of the school. The writer stated when his wife called the principal to complain about her actions, she hung up after saying it was “good exercise”.

In a statement, the local education bureau stated an investigation had found a pole dancing business had been invited into the kindergarten to perform. The statement added that the district believes the actions were not appropriate and the school has been asked to apologize to the students and the parents. Safe to say the school has a new principal, now.

Well, this is certainly a way to welcome students back to school. At least Ms. Lai can open up her own pole dancing business now, right?

Editor’s note: This article was originally published on September 4, 2018.