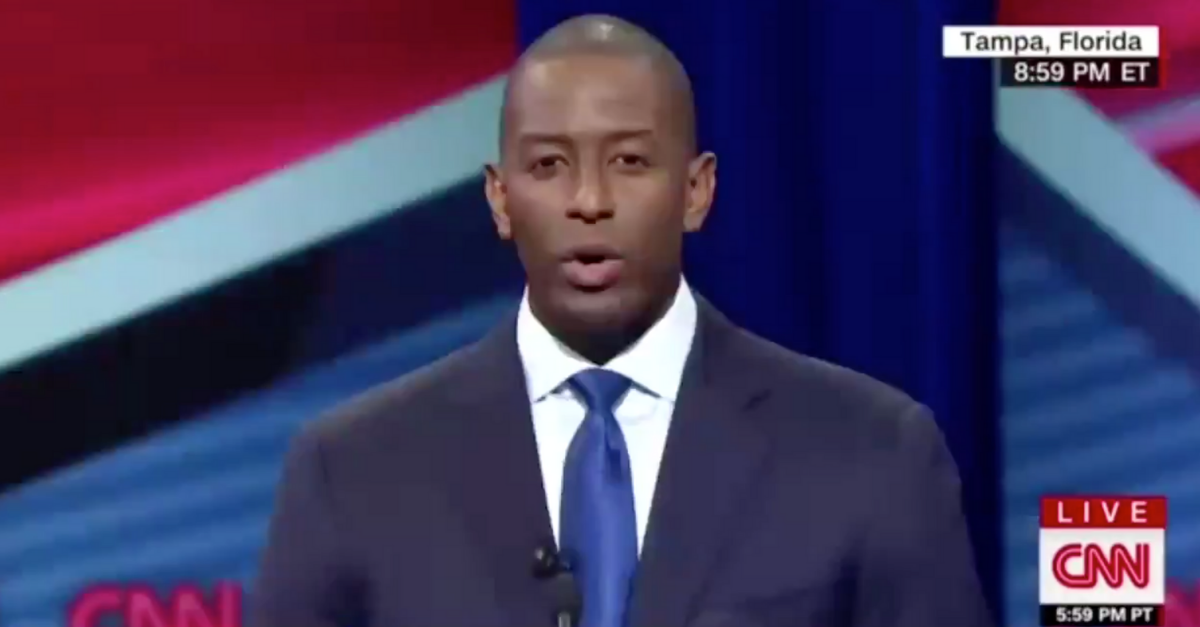 A group of neo-Nazis is inadvertently doing everything they can to send moderate and independent voters sprinting toward the left by sending out a ridiculously racist robocall to Florida voters in opposition to black, Democratic gubernatorial candidate Andrew Gillum. Not microaggression racist. Not inadvertent, out of touch, “back in my day” racist. Aggressive, gross, white supremacist racism.

The robocall imitated Gillum, the current mayor of Tallahassee, in minstrel dialect. The dialogue is almost too absurd to believe. Unfortunately, it’s real. It includes the following passages.

“Well hello there. I is the negro Andrew Gillum and I’ll be askin’ you to make me governor of this here state of Florida. My state opponent, who done call me monkey, is doin’ a lot of hollerin’ about how ‘spensive my plans for health care be.”

Throughout the call, minstrel music is playing while jungle noises and chimpanzee sounds can be heard in the background.

You can hear the whole call here:

It’s not the first one targeting Gillum, who is running to be the first black governor in Florida’s history. Another call was sent out in August by the same Idaho white supremacist group, called The Road to Power. That call also impersonated Gillum in a minstrel voice, purporting that black people lived in mud huts and that blacks would be able to evade arrest if they knew for sure that they “didn’t do nothin’.”

A spokesperson for the Gillum campaign called the robocall “disgusting” and “abhorrent.”

There is no room for any racial politics here in Florida – none. Florida is a melting pot of people from all over the globe, and we are proud of it. No attempts to divide people by race or ethnicity will be tolerated, from anyone. THIS. STOPS. NOW. https://t.co/LX72MvP89P

Florida is a pretty lawless place, so there’s a decent chance spamming thousands of people with an aggressively racist call somehow ends up being technically legal, which, if so, is insane. Sending people spam calls filled with jaw-droppingly racist crap is a pretty bold strategy to try and win votes. Guessing it doesn’t work super well. And the antisemitic stuff about Jews thrown in there at the end should definitely play well in Florida too. Go away.