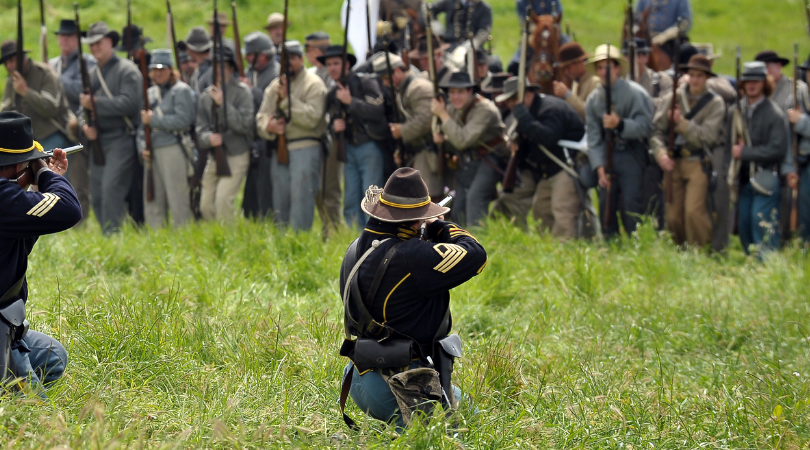 Across America’s history of military conflicts there have been unique sights and sounds made by our enemies that have struck fear in American soldiers. The dreaded appearance of the red coats of the British in the Revolution and the scream of their rockets during the War of 1812. The unfathomable scene of a Kamikazee plane roaring straight at a battleship in the Pacific Theater of World War Two. Trees speaking Vietnamese. All enough to (understandably) send lesser men and women running and never looking back. All a testament to the bravery of our armed forces.

Arguably the most terrifying enemy sound of all, though, came from our own countrymen during the American Civil War, when they were fighting to secede with the Confederacy. The Rebel Yell is the stuff of legend, screamed at Northern soldiers on every battlefield. By Alabama soldiers storming up the hills of Gettysburg and North Carolina regiments on the fields of Manassas, Virginia.

Though the cause this battle cry supported was wrong, the Rebel Yell itself has been marveled at and discussed since its birth — not just in the United States but as far away as London and Paris — largely because of how much it terrified the Union soldiers facing it. Federal troops who heard the yell have said it sent a peculiar corkscrew sensation of fear up your spine. One Union soldier claimed of the Rebel Yell that, “if you claim you heard it and weren’t scared that means you never heard it.”

The yelling was encouraged too, with the likes of Generals Stonewall Jackson and Jubal Early ordering their troops to shout it in order to push down their own fear and at the same time scare the Yankees back up north.

Despite the Rebel Yell’s long and widespread infamy, its exact sound has never truly been reproduced. Recording technology had not been invented at the time of the Civil War and wouldn’t until decades later when the Southern men who screamed their way across the battlefield were much older. Also, according to an anecdote from historian Shelby Foote in the classic PBS documentary Ken Burns’ Civil War, one Confederate veteran claimed after being asked to recreate the Rebel Yell that it couldn’t be done unless he was starving and running.

There are, however, countless descriptions of the yell from both Union and Confederate soldiers. It’s said to be similar to Native American war cries, while also having elements of what was called a “Texas yell.” After research and some tinkering, an authentic reproduction was finally reproduced for the first time. Though there aren’t any Civil War veterans around to verify the sound, historians believe this iteration fo the Confederate yell is accurate.

So, basically, the Rebel Yell sounds like you’re being attacked by a thousand ghost monkeys thirsty for blood. Or maybe a swarm of banshees coming to eat your soul. The fact that men faced this hell shriek down with nothing more than a front-loading musket is astounding. Listening to it you’d think some sort of flame thrower/machine gun combination would be necessary to fight this howling nightmare back. Hard pass on staring that down while the Confederate army comes charging forward ready to shoot and stab me. Thank God for those Civil War soldiers who did, all the way to Richmond and Appomattox.

Watch: ‘Gone with the Wind’ is Returning To Theaters for it’s 80th Anniversary!